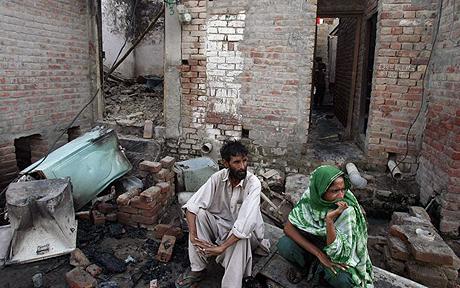 A Christian couple sit outside their destroyed home, a day after the Christian community was attacked in Gojra town, located in Pakistan’s Punjab province Photo: REUTERS

“We the Christians of Pakistan feel ourselves unsafe in our own land because of the religious extremism which is at its climax in the country. The religious extremism which happened to be limited has now spread to common Muslims. Pakistan has become hard place to live for minorities.” This was stated by Christian leaders representing Christian community of Pakistan while addressing news conference at Hyderabad press club on Wednesday. These leaders reverend Bishop Max John Rodrex, Bishop Rafiq Masih, Father John Murad and father Daniel Fayyaz demanded abolition of all blasphemous laws because these laws also sometimes are used by Muslims against Muslims; but in individual cases while in case of Christians if there is any case against an individual the whole village becomes the target of attack and destruction.

The Christian leaders said there was no doubt the majority of Muslims are nice people but few extremists commit attacks and nowadays whole Christian settlements are on their target which they said was an open evidence of terrorism.

They said minorities in Pakistan were peaceful and patriot who were living in the region since centuries. The Christians fought valiantly during successive wars to defend the motherland and their role as such could not be forgotten. However, they said the few blasphemy laws: section 295-B and C of Pakistan Penal Code were discriminatory against minorities particularly the Christians in Pakistan.

They added that Federal Shariat Court has held the one / s accused of blasphemy will be given punishment of no less than death (295/C). There is life sentence for those accused of desecrating the holy Quran (under section 295/B) and (under section 298/A.B) to those accused of blasphemy against Prophet Muhammad (PBUH). They lamented that under this law many settlements of Christians were razed to ground and not only the properties of Christians have been damaged but their honor also spoilt.“The blasphemy laws continue to hang on the head of Christians like sword”. Our beloved leader reverend Bishop John Joseph was martyred under this very law and hundreds of people of our community have been made a target,” they added.

They said in past few years 500 homes along with many copies of the holy Bible were burnt in Shanti Nagar, many innocent Christians and their homes were burnt to ashes in Rahimyar Khan and the Church of Bahawalpur, along with those of Islamabad, Mari, Texila, Karachi, Bannu, Daska, Sangla Hill and two churches burnt in Sukkur. They lamented that not a single accused has so far been arrested or punished. They said in few days back Christians’ homes were burnt, men, women and children killed, in addition top the women raped and properties damaged in Teesar Town Karachi, Baheniwala district Qasur, and now Korian village near Gojra where 68 homes of Christians have been burnt, 7 including women and animals burnt alive. They said in many cases the Muslims settle their score with Christians by attacking their villages, burn their homes and innocent men, women and children by misusing the blasphemy laws.

They said ” we Christians respect all religions as we and Muslims believe in one God and no Pakistani Christian could ever think of committing blasphemy, nor desecrate the holy Quran, nor could they speak anything insulting. No Christian in Pakistan could ever think of committing blasphemy. They alleged that in Gojra the administration watched the action against Christians like silent spectator. They made appeal to the provincial and federal governments to take action against the forces involved in attacks on Christians, to arrest them and to punish them so that no one in future can misuse the laws. They asked for ending the sense of deprivation among Christians of Pakistan and to give them the sense of existence. “We demand equal treatment to our community” said the leading members of the Christian community in Pakistan.

They announced that all Christian schools which had observed three days mourning will open from today. To a question on demand for separate Christian province they said if they were given equal rights and treatment there won’t be any need for separate homeland for Christians in Pakistan. To another question Bishop Rafiq Masih said, the incidents against Christian community have increased during past 15 months since PPP took over. To a question on role of Mr. Shahbaz Bhatti, Reverend Rafiq Masih said that the federal minister was not representing Christians in central government. He is a hand picked individual  of the ruling party and follows their policies and has failed to provide much needed protection to Christian community in Pakistan.

Outside the Hyderabad Press Club, Christians from various areas of Hyderabad city including those of Wahdat colony, GOR, Latifabad and other areas took out a rally from their respective colonies, Mohallas and towns towards press club where they chanted slogans for protection of the Christian community. The rally was led by Inayet Masih, Master Saleem, Younis Gill, Sooba Bhatti and others. They condemned the recent attack on Christians in Gojra and demanded arrest and punishment to the assailants. The participants of the rally blocked Miran Muhammad Shah road for an hour by staging a sit in before the press club.

Wonders of Pakistan supports freedom of expression and this commitment extends to our readers as well. Constraints however, apply in case of a violation ofWoP Comments Policy. We also moderate hate speech, libel and gratuitous insults.