Simultaneously earthbound and heaven-seeking, the weather-beaten pinnacles of Pakistan’s Karakoram mountains bear witness to the region’s harsh climate. The Karakoram Range marks the convergence of the borders of Tajikistan, China, Pakistan, Afghanistan, and India, lending it importance in the world of geopolitics. [Photograph by Galen Rowell]

On August 11, 2002, the lives of four singularly unique people came to an end as their small Cessna aircraft crashed at Bishop, California. Amongst those who died were Galen Rowell and his wife Barbara Cushman Rowell. Both extraordinary intrepid travellers, adventurers, photographers and mountaineers were returning from a trip to the Bering Sea and had a hectic and full schedule ahead.

In the words of Tom Brokaw, an old friend and admirer of Rowel’s work, “he was a man who went into the mountains, into the desert, to the edge of the sea, to the last great wild places in the world to be absorbed by their grace and grandeur. That is what he did for himself.

For the rest of us, he shared his vision with – click – the release of a shutter, creating photographs as timeless, as stunning, and as powerful as nature itself.”

So wrote Brokaw and I can only add that seeing Rowell’s work is like rediscovering faith in God, for how else could such a unique and stunning world come into being were it not for a master creator?

It will remain an abiding regret that I was unable to meet Galen who visited Pakistan many times. There was not a line about him here when he lived or when he died – and why should there have been? We are happy and ignorant in our cesspool, oblivious of the world going past. People like Galen mean nothing to us. The loss is of course ours. Galen photographed and wrote at least 23 books, each book a work of finesse and refined art. He was not just a phenomenal photographer but he had the gift of writing too. Thus each book is a kind of collector’s item, a book that should be in your hand. When he tragically died, they found thousands of meticulously labelled pictures that had yet to see the light. 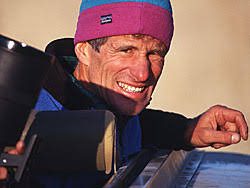 Galen’s first book came out in 1974. For the next 38 years the books continued to come pouring out, the last published posthumously by his children and friends in 2006, called A Retrospective. He wrote and photographed the breathtaking vistas of the Sierras, California, San Francisco Bay, North America, the Arctic and Antarctic, Tibet and China, Yosemite, Alaska and of course the people, mountains and valleys of his beloved Pakistan.

His pictures of the Himalayas, the Karakorams and the Hindu Kush are hauntingly beautiful. In the words of Frans Lanting, another photographer who has for over two decades produced work of stunning beauty, “Galen was in perpetual motion all his life. His strength and drive enabled him to go farther, higher and faster than any other photographer I know.”

“But Galen did not just connect physically with landscapes. His photographic vision grew out of a unique mix of athletic abilities, technical skills, intellectual understanding and artistic intuition, which enabled him to identify, chase, capture and interpret those ephemeral moments when light and landscape interact in ways that transcend specific situations”, adds Lanting. Galen’s picture that  almost magnetically attracted me, was done in 1981. This picture was taken by Galen while he was in Tibet walking at a considerable distance from the Potala Palace, the Dalai Lama’s lair in Lhasa. Galen saw a rainbow forming over the palace but he also realised that he had just a few moments in which to capture it – he was miles away. So cameras and all, he started to run back keeping the palace in sight. Image via

The picture that first drew me to Galen’s work almost magnetically was done in 1981. Galen was in Tibet walking at a considerable distance from the Potala Palace, the Dalai Lama’s lair in Lhasa. Galen saw a rainbow forming over the palace but he also realised that he had just a few moments in which to capture it – he was miles away. So cameras and all, he started to run back keeping the palace in sight.

It was a sustained effort that brought him at the right point and as the rainbow receded, Galen captured it literally as if it was rising from the Dalai Lama’s palace, a picture that revealed the reverential position of the Tibetan deity. Thus it was not just another picture of a palace and a rainbow.

A few years later, I saw another mesmerising picture. This was a 1975 photograph of a line of porters at Concordia in the Karakorams, the American K2 Expedition. There were no words to describe it then and no words today. Literally all his images exude the highest quality.

Then I saw another mesmerising picture by Galen. This was a 1975 photograph of a line of porters at Concordia in the Karakorams, the American K2 Expedition. There were no words to describe it then and no words today. Image via

This might be going from the sublime to the trivial but one day in the hills around Nathiagali, I was walking with my friend Javaid Khan (Papoo), younger brother of the famous and eccentric photographer, Pervez Khan (Patty). Pervez remains one of the best photographers that Pakistan has produced. It’s a pity his work remains hidden because he will not show it. However, now and then it appears in international books and you see the beauty and class of it.

But that day I stuck to Papoo, an artist in his own right, like a filing to a magnet – me with my fancy Olympus da-da-da camera and Papoo with a weather-beaten and much used old 35mm gizmo. I photographed exactly what he photographed, same angle, same height, same view. While his pictures came out breathtakingly beautiful, mine looked like something a respectable cat would avoid bringing indoors. I cursed Papoo under my breath and quietly erased each and every frame.

Of course no amount of words can come close to describe Galen’s work. It is a psalm, a worship of higher deities and of a world that exists alongside ours – but that is where the similarity ends. Many of his pictures capture a fleeting moment and although there are pictures that look like they have been mastered digitally, Galen neither used digital cameras nor resorted to special effects. He was just there at the right time and his lens captured a fleeting moment in perfection. The other thing that I love in his work is the framing – it is almost always perfect. Some look like water colours, some like a dream. Mists rising, hundreds of hues of leaves, snow-clad mountains, gurgling streams – it is a magical world.

In the words of Jon Beckmann, another distinguished professional, describing an expedition “for many people in the world, the landscape before us would be foreboding. For us, it had been a gradual ascent from the unknown into the familiar. Beyond the last villages we no longer saw strange human alterings of the scene, but rather the workings of nature common to all the world’s alpine areas: glaciers, rivers, …..clouds, granite, blue sky, raindrops, wildlife, and friends who shared our passions. We were home again.”

One could go on writing but what is important for me – and it should be for many of us – is the fact that through the untiring efforts of one man a whole world of incredible beauty and majesty swims into view, ours to behold as long as we wish to. I wish the US Consulate would hold a city-wide exhibition of Galen’s work and share it with others who dream but don’t dare!

Pakistan is a depressing place to be in today. Nothing is what it seems to be and our lives are ringed with boredom, purposelessness and the end of all and any value systems, but Pakistan has some of the world’s most stunning vistas as Galen showed us. The pity is that an entire generation and more have no clue of this and thus no identity.

Tourism is a huge failure and will never revive and so it is up to our children to explore and discover what their heritage is. If they don’t, they will be adrift and lost beyond recall.

Galen Rowell opened up to the Pakistanis the incredible land they had. It is there within reach. Can we venture out? Can we stand at Concordia and watch the glaciers crack and meander like they were transversing a highway of ice? Can we find our roots and have at least some sense of pride? The choice is entirely ours.

More from Masood Hasan on Wonders of Pakistan

The writer is a Lahore-based columnist. Email: masoodhasan66@gmail.com

1. Are we wrong about Pakistan? 2. Discovering a totally different country – Pakistan

We do not claim exclusive rights on all articles, images or videos published on this site. The sources we use to create our articles, images, videos etc. are credited with a proper linkback.

However, we do host material from unknown authors we receive via mails, from friends and our readers.

If you own copyrights to some material and you want us to remove it from our pages, contact us to claim your ownership and we will either credit you, or if you wish – completely remove the content.

3 replies to “Galen Rowell: The Man And His Art”