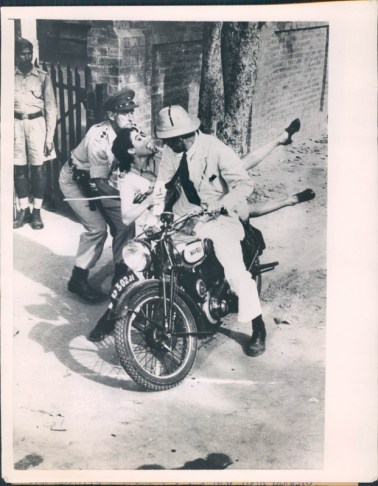 Pakistan today is a conservative, Islamic country, but it was a far different place in its younger days.

In the 1960s and ’70s, Pakistan’s elite, many of them educated in the West, could publicly indulge in more liberal acts, including drinking alcohol. Pakistan was also part of the “hippie trail,” from Turkey to India, which young Westerners traveled.

Image above: A scene from Hollywood blockbuster ‘Bhowani Junction’ being shot (1955) outside a Lahore police station.

IN SPITE OF GREY AREAS, OUR PAST WAS A CONFIDENT. TOLERANT. JOYOUS.

Note for WoP readers: In a previous issue, I put up a piece by Nadeem F. Paracha which allowed you peep in times when Pakistan was an open, relatively liberal and a confident country. Though to keep the main theme in sync with the ambiance,  the life and the moods prevailing in those days and to elaborate the timeline of that period, I rearranged the pics so that you get a clear picture of what was happening in those days, and also took the liberty to re-title it as “Those were the days, My Friend……” Yet the essence of Paracha’s original piece has been kept intact.

Now, in the second part of this series, here now are more pics with apt descriptions by Nadeem F. Paracha, the author of the series.

***
Pakistan today is a conservative, Islamic country, but it was a far different place in its younger days.

In the 1960s and ’70s, Pakistan’s elite, many of them educated in the West, could publicly indulge in more liberal acts, including drinking alcohol. Pakistan was also part of the “hippie trail,” from Turkey to India, which young Westerners traveled.

Once a major stop on the backpacking route, Western tourists don’t exist in the Peshawar that I have come to know through my visits to family in the northwest corner of Pakistan, near the Pak-Afghan border.

If my parents saw “hippies” around hashish shops on their city’s streets, they never mentioned them to me. The only Western women I’ve come by in Peshawar are in ads for talcum powder or maxi pads — their bodies often draped in an ominous shroud of black paint. Turns out this experience is common among millennials in Pakistan.

“Most of the stories about a more open and liberal Pakistan have come down to the young, post-’80s generations of Pakistan from their parents as oral anecdotes,” Nadeem F. Paracha tells me in an e-mail. “But since most young Pakistanis have only known a more troubled and repressed Pakistan, they were incapable of picturing it.”

Paracha, a columnist for the Pakistani newspaper Dawn, spent two years scouring newspaper libraries and the personal photo collections of family, friends and acquaintances for images that reveal a more open society. The pictures he found make Pakistan’s past seem like a completely foreign place.

What caused this great divide? Paracha offers one explanation: “We as a people and state began to crumble inwards.”

According to Paracha, beginning in the 1970s, a deep suspicion of foreign powers and minority faiths began to set in that gave way to a more subtle, Islamic version of Mao Zedong’s Cultural Revolution.

From the images Paracha collected, it’s clear that a lot has changed for Pakistanis in the past few decades.

In a three -part Web series, Paracha includes a newspaper cliping that describes how The Beatles’ Paul McCartney was engulfed in a frenzy of fans at an airport bar in Karachi.

In today’s Pakistan, alcohol is officially banned except by permit for non-Muslims, and it’s hard to imagine that any global music sensation would pass through the country if he could avoid it.

While the pendulum might not swing back anytime soon, Paracha says presenting these photos has sparked optimism among young Pakistanis.

“It has given them a sense of pride, and more so, hope,” he tells me, “that if Pakistan had deep roots in things like religious extremism, military rule and corruption, there was still an important part of the country’s history that radiated a more confident, progressive, tolerant and joyous Pakistan.”

A press ad in a Pakistani magazine announcing the launch of Canadian Club Whiskey in Pakistan. The whiskey was first made available at Karachi’s horse racing and polo club (Race Course) and then introduced in the city’s many bars. 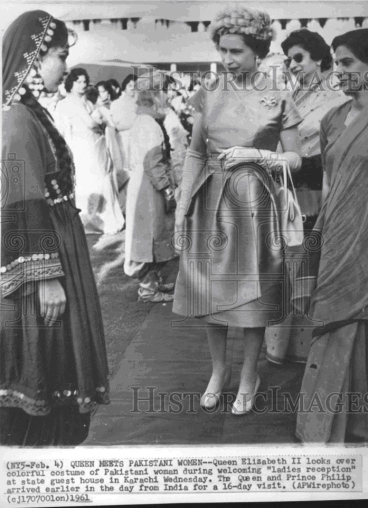 The Queen of England (Elizabeth II) meeting a welcoming committee during her visit to Karachi in 1961. She also toured many parts of the city with the then ruler of Pakistan, Field Martial Ayub Khan in an open-top limousine. 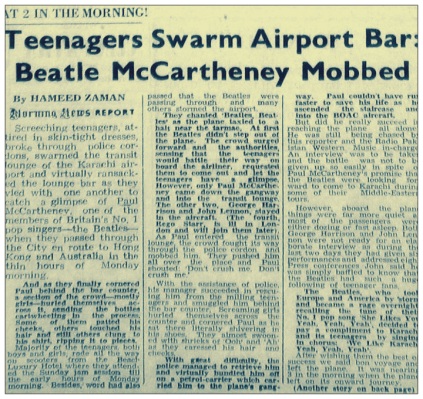 A newspaper clipping (from Pakistan’s daily, ‘Morning News’) with a report on how Pakistani pop fans gate-crashed their way into a bar at the Karachi Airport where the famous pop band The Beatles were having a drink. They had arrived in Karachi (1963) to get a connecting flight to Hong Kong. Between the 1960s and late 1970s the Karachi Airport was one of the busiest in the region. (Picture Courtesy: Sami Shah). 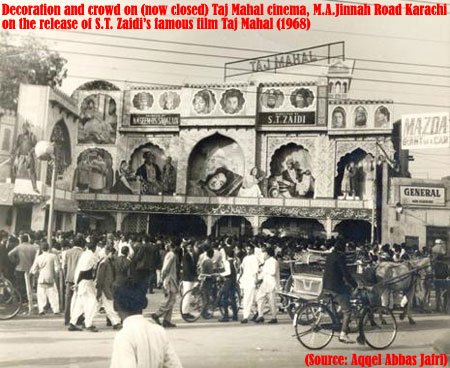 A 1968 shot of a famous Karachi cinema, Taj Mahal. It was one of the many that operated during the heydays of Pakistan’s film industry.

Between 1965 and 1977, the industry produced dozens of films every month. The trend hit a peak in 1975 when a total number of 114 Urdu films were released that year.

The industry began to wither away from the late 1970s due to the arrival of a reactionary dictatorship and then the growing popularity of the VCR.

Today the Pakistan film industry that was one of the most lucrative show-biz ventures in the country in the 1960s and 1970s is as good as dead.

Plainclothes cops nab a radical Pushtun nationalist student who was accused of firing shots from a concealed gun at Ayub Khan at a pro-Ayub rally in Peshawar. 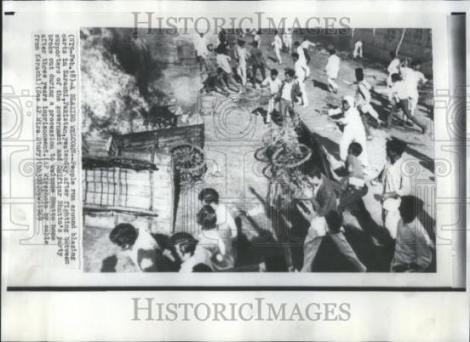 Students sympathetic to the Pakistan Peoples Party (PPP) and the left-wing National Students Federation (NSF) clash with the police and pro-government students in Karachi. The student and labour movement between 1967 and 1968 had already toppled the dictatorship of Ayub Khan. 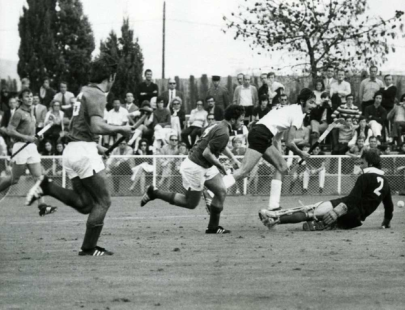 A rare photo showing the Pakistan hockey team on its way to win the 1971 Hockey World Cup held in Barcelona, Spain. It defeated the host country in the finals.

East Pakistani women march with guns on the streets of Dhaka in a show of defiance against the West Pakistan military establishment.

Pakistani men take an adventurous ride on an Afghan taxi (1972). Every day thousands of Pakistanis crossed into Afghanistan for trade on such taxis. Many would also visit Kabul to watch latest Indian films in Kabul cinemas then return to Pakistan in the evening. 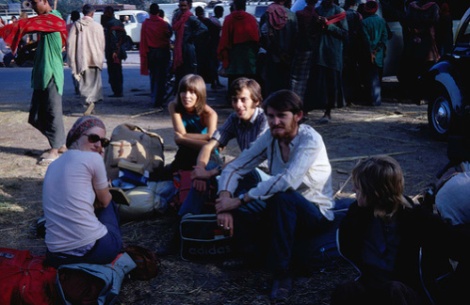 A group of hippies (British, French and American) wait for a bus in Lahore (1972). Pakistan was an important destination on what was called the ‘Hippie Trail.’

The trail was used by thousands of young European and American backpackers between the late 1960s and 1979. It was an overland route that began in Turkey, ran through Iran, curved into Afghanistan and Pakistan and then from India ended in Nepal.

A huge tourist industry sprang up in these countries to accommodate the backpackers. In Pakistan, the travelers entered Peshawar (from Jalalabad in Afghanistan). From Peshawar they went to Lahore. Some took a bus into India while others visited Karachi and Swat before returning to Lahore and crossed into India.

The trail closed after the 1979 Islamic Revolution in Iran; the beginning of civil war in Afghanistan; and due to the reactionary nature of the Zia-ul-Haq dictatorship that came to power in Pakistan in 1977.

Cover of the May 1972 issue of The Herald. Herald (a monthly published by the Dawn Group) was initially a magazine focusing on the changing fashion, political and social trends of the urban Pakistani youth. However, from 1980 onwards it became more political in its content.

Famous Pakistani model, Rakhshanda Khattak. She was one of Pakistan’s leading fashion models in the 1970s before quitting and leaving the country in 1979. She died in the United States in 2011.
(The photo is from 1972). -Photo courtesy: Express Tribune

Astronaut of NASA’s Apollo 17 and his wife wave to fans on their arrival at Lahore Airport.

A 1973 tourism brochure printed by the Pakistan Ministry of Tourism. The brochure had details of hotels, restaurants, bars and tourist spots that had sprung up on the Hippie Trail.

A 1973 issue of The Herald with a cover story on the then vibrant social scene of Karachi.

This particular billboard was painted in Lahore and was used to advertise Lee’s 1973 blockbuster ‘Enter the Dragon.’ Just like in the West, Lee had become an icon and hugely popular with action film enthusiasts in Pakistan as well. His films did roaring business in cinemas and popularised the martial arts in Pakistan. Lee died a sudden death in 1973.

A more contemporary rendition of a Sindhi nationalist poster. The poster was first designed and printed in 1973 soon after the formation of radical Sindhi nationalist party, the Jeeay Sindh. The poster tries to encapsulate (and propagate) the secular, pluralistic and tolerant nature of Sindhi people and their links with Sufi Islam.

Wife of the Shah of Iran arrives at the Quetta Airport (1973). She was greeted by the then Balochistan governor, Mir Ghaos Baksh Beznjo, who belonged to the left-wing National Awami Party (NAP) that headed the government in Balochistan (after the 1970 election).

Ironically, Bezenjo and the NAP government in the province were dismissed by the Z A. Bhutto regime when the Shah of Iran warned Pakistan that NAP was instigating Baloch nationalist rebellion in the Iranian part of Balochistan.

Next: After Three Decades of Relatively Tolerant Pakistan, Comes the Long Dark Night of the Generals

Those were the days my friend in three parts]

Source of text and all images