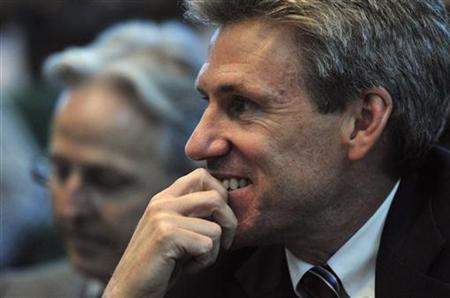 U.S. envoy Chris Stevens listens during a news conference held by leaders of Libya’s rebel leadership after talks with representatives of the African Union in Benghazi April 11, 2011.

US AMBASSADOR KILLED IN BENGHAZI, LIBYA

First a note from Peter Chamberlin:

[Resentment over what we have done there may cause a wave of reprisal killings and militant actions.  In this case, embassy guards came under heavy, concentrated fire.  This were not merely the actions of an enraged mob; this was a military action.]

The film named ‘Innocence of Muslims’ is a hotchpotch of such nasty matter that a person like me (essentially a secularist by temperament), could not feel like having even a glimpse of the shit they have put in the film.

I abhor what our maulvis do in the name of Islam, yet the videos put on the net as clipss from this so called movie, have such stench that I did not feel like watching this garbage at all.

My immediate reaction was to send an SMS to all my friends carrying the following text:

A US/Israeli estate owner has produced a film which depicts our holy prophet (pbuh) in a manner no Muslim can accept.

I myself though do not believe in the interpretations of Islam by mullahs, yet to depict our holy prophet, the blesser of mankind in such manner is beyond acceptability.

However, instead of burning US flags, attacking and burning our own properties or the ones belonging to foreign nationals, diplomatic missions, foreign NGO’s, foreign aid workers, or Europe/US based charities, let’s join hands in condemning this satanic act by staging peaceful demonstrations and conducting interfaith dialogue with our non Muslim friends.

And showing even satans of the like of Terry Jones and Sam Bacile that Islam is a religion of peace for Muslims and non believers alike – as was the practice of the holy prophet whenever the Kafirs tried to throw mud on his person or character .

For its was mostly his peaceful overtures to the Kafirs of Mecca that they accepted his message, the message of Allah he brought to us humans.

Normally, I do check whenever something comes in the media against Muslims, Islam or Pakistan. Because in this age the media has been laced with such scientifically perfected falsehoods that many a  time the falsehood appears more truthful than the real truth.

THE FILM TRIGGERS OUTRAGE AND DEATH

To Muslims, the making of this film first came to light when in Benghazi which was the centre of anti Qaddafi forces (mainly funded, trained and physically supported by US), protests started which later culminated in attack on the US consulate thereby causing the death of US ambassador in Libya Mr. Chris Stevens and three other US officials.

AND THE FILM IS A COMPLETE FLOP

It is being said that this film cost the producer $5million but the people who have seen the trailer of this film on the net and those who saw it in film theaters [which again seems to be a hoax, because there has been perhaps no movie made at all] think this is an exaggerated claim. because the quality of dubbing and other features which make a film popular is so poor that the time it was released, it proved a complete flop.

Even the man who produced or directed this film named Sam Bacile (which apparently is a pseudonym) is worried that the film had hardly a few viewers.

And the cast and the crew involved in filming this bullshit have doubts over veracity of film after having seen the poorly dubbed scenes and editing. So no more a surprise that all those involved in shooting of this film have distanced themselves saying they were ‘misled’.

WHO IS SAM BACILE?

Now something about this Sam Bacile. first it was said that he is an Israeli Jew living in California, but this identity began to crumble as it emerged that Israeli authorities had no records of him being a citizen, and there were no property, phone, license or court records of Bacile in California.

He also has virtually no footprint in the Hollywood community, has no agent listed on IMDBPro and no credits on any film or TV production.

Right: Steve Klein is reported as consultant on the film that sparked outrage in Libya and Egypt – but said the filmmaker worked under a pseudonym

Steve Klein, a consultant for the film, told the National that Bacile is not Israeli or Jewish and is in fact working under a pseudonym – but he does not know the man’s real name.

There are speculations that Bacile could be Morris Sadek, an anti-Islamic Coptic Christian from Egypt.

The strange turn of events came after a 13-minute trailer for this film, when it was dubbed in Arabic last week and immediately sparked outrage in Egypt.

There are questions over the real identity of the man behind the ‘offensive’ film and his motives for creating a movie that promised to spark outrage – and death.

Terry Jones, the sinister Pastor who inflamed anger in the Muslim world in 2010 with plans to burn the Koran, said he had promoted ‘Innocence of Muslims’.

‘I am not afraid if these people tried to kill me, they would not be the first. I sleep with a 12 gauge shotgun by me and my wife sleeps with a 38 caliber pistol next to her.  He said:

‘I live in rural California with lots and lots of guns – I am not afraid to stand up for what I believe in.’

Consultant to this shit on celluloid, Mr Klein said that he had spoken to Mr Bacile on Tuesday night and that the director was ‘in fear of his life’.

Klein said he warned him ‘you’re going to be the next Theo van Gogh’ – a Dutch filmmaker killed by a Muslim extremist in 2004 after making a film that was perceived as insulting to Islam.

There were fears ‘Bacile’ could become a target for this shitty act like Theo van Gogh, [pictured right], who was killed by a Muslim after making an anti-Islamic film

Klein further said: ‘He is scared and nervous. He didn’t say much. Going into this we knew something was going to happen, but we didn’t realise this. He is in hiding and I have no idea where he is.’

While he declined to give details, Klein said the film was paid for by ‘Middle Easterners, Jewish people, Christians and a lot of former Muslims’. Some money came from Britain, Scotland, France, Germany and Holland,’

But when it premiered in a cinema in Los Angeles three months ago, it was a ‘ complete failure’.

It has now come to light that this anti-Islam movie (a propaganda hit piece) is no movie at all, but hoax. Some clips so crudely made, some shit put into these and then circulated on the net only to malign Muslims, and the Holy Prophet (pbuh).

It appears now that the videos have probably been created by the same Christian Zionist nutbags to which Romney and the right-wing echo chamber are now playing. But never mind… it’s all just a huge coincidence… right?

1) Enlist shady Christian Zionists to create an international incident with a propaganda film intended to enflame Islamists
2) Get innocent people killed
3) Blame it on Muslims/Obama’s foreign policy and smirk while doing it
4) Gear up right-wing fringe echo chamber
5) Vote Mitt!

A few factoids not to be disregarded: http://www.dailykos.com/story/…

How Terry Jones Can Get Away With It