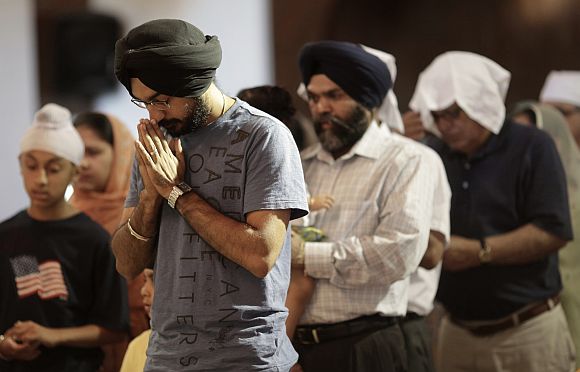 The mourners were touched when the grief-stricken Sikh community opened the doors of the Brookfield gurdwara to embrace hundreds who came to offer their support in the aftermath of the shooting. “I came with my family to show our support to the grief-stricken people. It was a bad man who did the killings,” a tearful Hope Bailey of Muskego told the local Milwaukee Journal Sentinel.

WE CONDEMN THE SENSELESS ATTACK IN SIKH GURDWARA OF OAK CREEK

We at Wonders of Pakistan strongly condemn the senseless and horrific attack on the Sikh Gurdwara in Oak Creek, Wisconsin, USA. Our hearts go out to our Sikh brethren in Wisconsin and around the world. Khalsa Sajanrho! Assi tuhadhay dukh dard che brabar de sharik haan . (we stand with you in solidarity during this sorrowful time).

Acts of such kinds remind us how the prejudice, fear and hate can lead to violence.  Though its difficult to move beyond this tragedy, our resolve is only strengthened, and we will continue to work towards cultivating harmonious and peaceful coexistence amongst different faiths.

We call upon our American friends to respond to this tragedy by supporting the families of the victims, and Sikh community members. Over the course of this week, vigils are being held around the US with the message of “We are all Sikhs.” We all stand in support of the Sikh community and the values that bind us as believers in one God. I understand Pakistanis, Muslims and non Muslims alike are also attending these vigils in their respective area in the US pledging support for victims of hate crimes.

The Pakistani community in the US has also endorsed a letter raising  concern about rise in hate crimes and discrimination and violence that Sikh, Muslim, Arab, and South Asian communities have endured (including the recent Joplin, MO mosque arson attack); reaffirmation of inclusion, equality, and pluralism; and asking President Obama  to convene a summit on xenophobia and religious hate in America.

Rabbi David Wolpe of  Sinai Temple in Los Angels penned the following poem about the tragedy.

Why do you suppose a man

Would kill some Sikhs at prayer?

Could he have suspected that Just Muslims worshiped there?

Imagine how he’d be distressed

To know his aim was true

Yet nonetheless failed to hit

One Muslim, black or Jew.

The tentacles of baseless hate

And will not cease until their prey