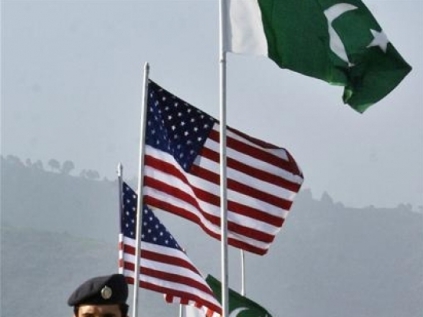 We know it’s best to avoid the risks and consequences of taking on a hyper power, but turning a blind eye to Washington’s conceit and lurid tricks (Salala) is manifestly not in our interests. And to aver, as many do, that right or wrong we must adjust our stance to American policies is sheer defeatism. That’s a mindset reminiscent of the boss is always right policy that ambitious office workers adopt but which does not befit a proud Pakistani nation.

BREAKING  MARRIAGE OF CONVENIENCE IS NO SOLUTION. BUT TO CONTINUE, MARRIAGE  HAS TO OFFER  CONVENIEENCE, FOR BOTH

Of course we don’t like branded ‘pro jihadist’ and ‘duplicitous’ by America; and not only the lily livered amongst us would have liked the government to be less abrasive and quarrelsome when dealing with Washington.

Moreover, we know it’s best to avoid the risks and consequences of taking on a hyper power. However, turning a blind eye to Washington’s conceit and lurid tricks (Salala) is manifestly not in our interests.

And going on to aver, as many do, that right or wrong we must adjust our stance to American policies is sheer defeatism. That’s a mindset reminiscent of the boss is always right policy that ambitious office workers adopt but which does not befit a proud nation.

Caving in out of fear – the one permanent emotion of the inferior man – hardly ever pays and, in any case, Pakistan was not created by cowards and cowards won’t save it.

Nevertheless, a serious drawback in our approach to policy making is our ‘dhe-ka-jaiga’ approach. In other words, signing on to a course of action without being absolutely certain of the outcome and whether it’s the best course in all circumstances. Hence, when we try and wriggle out of a commitment because it no longer suits us, we are understandably accused of duplicity.

That is not to say that America is any less adept at shifting the goal posts and abandoning allies after leading them up the garden path, as we learnt to our cost in 1990. But America, being America, commands a huge publicity machine to hide its tracks.

For instance, when we offered the Americans our military partnership to get rid of Al-Qaeda in 2001, we assumed the entire affair would be a cake-walk and the fighting would be brief and limited.

And that would have happened had the Americans not got carried away with the ease of their initial victories in Afghanistan and unilaterally decided to tag on ‘nation building’ and ‘installing democracy’ to their mandate.

Thereafter, what promised to be a short and limited military action was transformed into an endless war and an open ended occupation of Afghanistan. So much so that the withdrawal plans announced earlier this year will not even begin to take effect until 2024, nearly a quarter of a century after the war began.

Having unilaterally transformed its mandate, Washington nevertheless expected us to keep to our original commitment although that had been obtained on the basis of an entirely different set of assumptions.

Likewise, whereas the target of the Isaf effort was Al- Qaeda, with the Taliban a secondary concern, and only to the extent they hampered the search for Al-Qaeda, the Taliban became the primary US target following the elimination of Al-Qaeda in Af-Pak. And today, in a classic example of ‘operation creep,’ America has Pakistan in her sights.

Inevitably public suspicion of America’s malignant intent towards Islam, Muslims and Pakistan has greatly intensified. Prior to 2001 such suspicion was the view of a minority of Pakistanis, today it has acquired the force of conviction with the overwhelming majority. In fact, Indo-US strategic collaboration, with its heavy reliance on military cooperation, is considered as pregnant with harmful consequences for Pakistan’s long-term security as the Indo-Soviet accord of 1970 turned out to be for the pre-1971 Pakistan.

None of all this was on the cards when Pakistan’s cooperation in the Afghan war was obtained in 2001. Hence, to berate Pakistan for withholding support of current American policies in Afghanistan in violation of our earlier pledge is sanctimonious humbug.

A more courageous regime in Islamabad would have either pulled out of the arrangement or re negotiated the deal, the present one did neither. Perhaps because they were distracted by a series of events that were not in the control of either side, and were handled poorly by both when they occurred. Whatever the reason that opportunity was missed and the acrimony has intensified, indeed, hostility between Washington and Islamabad is mounting by the day.

US Defence Secretary Leon Panetta’s warning in New Delhi about America running out of patience with Pakistan for harbouring the Haqqani Taliban had the ring of an ultimatum.

The import of his message was clear enough: relations with Pakistan have ceased to matter to Washington, at least, to the extent that they are worth preserving regardless.

Professor Christine Fair, a Pakistan expert, believes Washington will henceforth hold Pakistan responsible for any act of terrorism that has Pakistan’s ‘signature’ on it; and that America’s list of targets will be expanded to include militant leaders of the Lashkars and Jaishes and also ‘individuals within the ISI who are Taliban allies’. One immediate consequence of the new policy – the increased use of drones – is already evident.

Why, then is Pakistan not taking action against the Haqqani Taliban sheltering in FATA rather than risk a hiatus in relations with America?

And the short answer is that the Pakistani military does not possess the requisite wherewithal in terms of resources, men and equipment to take on the Haqqanis even assuming the political will had existed.

For a start, Pakistan’s eastern front (facing India) would have to be further denuded of troops. Besides, all the Taliban would have to do to avoid giving battle is to relocate. In other words, it’s not so much a matter of Pakistan not doing what it can do easily but sensibly refusing to do what is virtually impossible and preferring not to say so.

Moreover, the Haqqani Taliban do not enjoy ‘sanctuaries’ in North Waziristan, in the sense that they have a ‘safe haven’ where they can put their feet up and enjoy a normal life while planning the next attack on ISAF.

Had that been the case they would have been ‘droned’ into oblivion. The ‘safe haven’ allegation is mostly a ruse that has been successfully and skillfully exploited to explain Isaf’s military failures.

What do exist in North Waziristan, however, are groups of anti-American insurgents using the terrain to hide in an environment that is marginally though not appreciably safer.

Of course, Pakistan could make life more difficult for them, though never enough to make up for the failure of ISAF to interdict movement and supplies of the Haqqani’s to and fro across the undefined border and all the way up to Kabul despite a huge troop presence.

But a far more important reason for Pakistan’s stance is that Fata cannot be successfully invaded and controlled by force. FATA is a mini Afghanistan, in other words, it is unstable, fractious and ultimately ungovernable except with the consent of the populace.

Efforts to occupy FATA will end in disaster. It will turn the tribes of Fata, and in the adjoining areas spanning the Pak-Afghan border, against Pakistan and pose a much bigger threat to our integrity than America ever can.

In retrospect our abiding sin was to ask to be treated as a partner by the US and, when that did not happen, to accept the role of a surrogate; and while giving the impression that we had been bought, for refusing to stay bought.

The writer is a former ambassador. Email: charles123it@hotmail.com