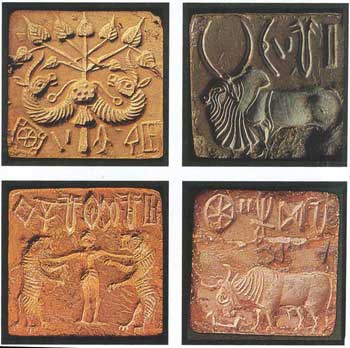 Notable in civilization around the Indus Valley is the lack of strong resemblances to other early civilizations to the west of Mesopotamia, which indicates that Harappa was not a colony. Skeletal remains, however, show that the dominant human type of the peoples who built the civilization was a tall, long faced, dark-haired strain much like those from the Mediterranean region.

And the civilization was anchored on two cities: Harappa in the north on one of the five great rivers that forms the Indus, and Mohenjo-daro, 400 miles to the south on the banks of the Indus proper. These cities formed the town capitals of a complex of smaller urban centers and villages that covered an area four times the size of Sumer and twice the size of Egypt during the Old Kingdom.

THE INDUS VALLEY & THE GENESIS OF  CIVILZATION IN ASIA

Today the script still has not been deciphered and much of the original mystery remains. But decades of extensive excavation at the original site and hundreds of other sites throughout the Indus valley have uncovered a huge complex of cities and villages that made up the first civilization in South Asia. The evidence found so far indicates that Harappan civilization developed quite rapidly in the middle centuries of the 3rd millennium B.C. There are sharp divergences from the village cultures that preceded it in levels of material culture, scale, and organization.

Equally notable is the lack of strong resemblances to other early civilizations to the west of Mesopotamia, which indicates that Harappa was not a colony. Skeletal remains, however, show that the dominant human type of the peoples who built the civilization was a tall, long faced, dark-haired strain much like those from the Mediterranean region.

The civilization was anchored on two cities: Harappa in the north on one of the five great rivers that forms the Indus, and Mohenjo-daro, 400 miles to the south on the banks of the Indus proper. These cities formed the town capitals of a complex of smaller urban centers and villages that covered an area four times the size of Sumer and twice the size of Egypt during the Old Kingdom. That the many sites associated with the Harappan complex were part of one civilization has been established by the excavations of layer after layer of cities and towns rebuilt in the same way, with the same proportions, at the same locations.

Though hundreds of miles apart, Harappa and Mohenjo-daro were remarkably similar in layout and construction. Both were built on a square grid pattern that was divided by main thoroughfares into 12 smaller and precisely measured grids. Each of the cities was surrounded by walls, which extended one mile from east to west and one-half mile from north to south. The buildings of the cities and the surrounding walls were made of standardized kiln-dried bricks. Controlled building on such a massive scale would have required an autocratic government with the capacity to organize and supervise the daily tasks of large numbers of laborers. This control appears to have extended to the Harappans’ domestic lives as well.

The existence of a strong ruling class is also indicated by the presence of large and well-fortified citadels in each of the capital cities. These citadels served as sanctuaries for the cities’ populations in times of attack and as community centers in times of peace. The citadel at Mohenjo-daro included a very large building that may have been a palace.

Both citadels contained what are believed to have been audience and assembly halls or places of worship, and bathing tanks for public use. The elaborately decorated bath at Mohenjo-daro was surrounded by a cloister, which opened onto many small rooms that may have housed priests of the city’s cults. Large granaries were located near each of the citadels, which suggest that the state stored grain for ceremonial purposes, times of shortage, and possibly the regulatation of grain production and sale.

Though the main avenues of the cities were straight and about 30 feet wide, the lanes and paths in the cities’ quarters were narrow and twisting. Brick houses of one to three stories were jumbled together in these areas, which must have been densely populated at the height of Harappan civilization. The layout of the houses was strikingly uniform in that each consisted of a courtyard surrounded by rooms for   sleeping, cooking, and, in the larger homes, receiving visitors. Entrance to the houses was gained through a long passageway from the street, which in combination with few windows reflects a concern for security. The lack of ornamentation on the houses and the  dun-colored brick walls must have given the cities a very drab appearance.

Each of the homes had a bathing area and drains that emptied into a covered, citywide sewage system, which was the best in the ancient world. The Harappans apparently bathed standing up by pouring pitchers of water over their bodies. Some scholars believe that bathing was related to religious rituals rather than hygiene.

The great cities and many towns of the Harappan complex were supported by a rather advanced agricultural system based on the cultivation of wheat, rye, peas, and possibly rice. Cotton was widely cultivated and numerous domesticated animals were reared. It is likely that irrigation systems were built to catch and control waters from the monsoon and the rivers, and that fish caught in the rivers provided an additional dietary staple.

The cities of Harappa were major trading centers. The mysterious seals from the Indus civilization have been found in urban ruins as far away as Sumer in Mesopotamia. Jade from present-day China and precious jewels from what is now Burma have been unearthed at various Indus sites. Despite these overseas contacts, Harappan peoples appear to have been intensely conservative and highly resistant to innovations introduced from the outside.

They cast tools and weapons in bronze, but most of their tools were inferior to those of Mesopotamian peoples with whom they had contacts, and their weapons were even more primitive. They lacked swords, tipped their spears with bronze points so thin that they would crumble on contact, and used stone for their arrowheads. These shortcomings may have proven fatal to the survival of the Harappan civilization.

Harappan society was dominated by a powerful priestly class that ruled from the citadel of each of the capitals. Though there may have been specialized warriors, the priests appear to have been the main coordinators of fortress construction and preparation for defense. The location of granaries and artisan dwellings near the citadels indicates that the priests may have  also overseen handicraft production and supervised both regional and long-distance trade.

The priests derived their impressive control over city and town dwellers from their role as the intermediaries between the Harappan populace and a number of gods and goddesses, whose provision of fertility was of paramount concern. Several of the gods are depicted on the undeciphered seals that are dominated by a naked male figure with a horned head and a fierce facial expression. On some of the seals he is pictured in a crossed-legged posture of meditation similar to that which was later known as the lotus position.

Numerous figurines of females, also naked except for a great deal of jewelry, have been found. These “mother goddesses” appear to have been objects of worship for the common people, while the horned god was apparently favored by the priests and upper classes.

The obsession with fertility was also reflected in the veneration of sacred animals, especially bulls, and by the large quantity of phallic-shaped objects that have been found at Harappan sites. Along with a handful of superbly carved figurines of male notables, dancing girls, and animals, these cult objects represent the pinnacle of artistic expression for the rather unimaginative and practical-minded peoples of Harappa.

The control exhibited by the uniformity and rigid ordering of Harappan culture would not have been possible without an extensive administrative class serving the priests. It is probable that members of this class and possibly wealthy mercantile families lived in the large two- and three-story houses. Characteristically, size – not decoration – set their dwellings off from the artisans, laborers, and slaves that made up the rest of the urban population.

Outside of the two great cities, the subjects of the priest-rulers were agriculturists, whose surplus production was essential to urban life and the maintenance of very vulnerable defenses against natural calamities and human aggressors.

THE END OF  HARAPPAN CIVILISATION

It was once widely accepted that Harappan civilization was the victim of assaults by nomadic invaders eager to claim the rich Indus valley as pasturelands for their herds of cattle. A dramatic vision of a wave of “barbarian” invaders smashing town dwellers’ skulls made for good storytelling but bad history. Archeological investigations carried out in recent decades demonstrate rather conclusively that Harappa declined gradually in the middle centuries of the 2nd millennium B.C. The precise causes of that decline remain a matter of dispute. The later layers of building at Harappa and Mohenjo-daro as well as at other sites show a clear deterioration in the quality of construction and building materials. There also are a few smashed skulls, but these have been dated somewhat earlier than the period when the civilization disappears from history.

It is likely that a combination of factors led to Harappa’s demise. There is evidence of severe flooding at Mohenjo-daro and other sites. Short-term natural disasters may have compounded the adverse effects of long-term climatic changes. Shifts in the monsoon pattern and changes in temperature may have begun the process of desertification that eventually transformed the region into the arid steppe that it has remained for most of recorded history.

Rapid changes in types of pottery suggest a series of sudden waves of migrants into the region. It is possible that the Harappans were too weak militarily to prevent these incoming peoples from settling in or taking over their towns and cities.

The marked decline in the quality of building and town planning indicates that the priestly elite was losing control. Some of the migrants probably were bands of Aryan herders who entered the Indus region over an extended period of time, rather than in militant waves. But the Aryan pastoralists may have consciously destroyed or neglected the dikes and canals on which the agrarian life of the Harappan peoples depended. Extensive cattle raising would then have replaced intensive crop cultivation, further undermining the economic basis of the civilization. That there was a good deal of violent conflict in this transition cannot be ruled out. Groups of skeletons in postures of flight  have been found on the stairways at some sites. There is evidence of burned-out settlements and the flight of refugees through the passes into the Himalayas to the north. Thus, a combination of factors brought an end to South Asia’s first civilization. These factors also gave rise to an extended transition period, dominated increasingly by the nomadic Aryan invaders.

Next: Indus Valley  Civilisation: The Genesis [3 of 3]

2 replies to “Indus Valley Civilisation: The Genesis [2 of 3]”