According to London’s daily mail, both secretly agreed to allow unilateral American action against Osama Bin Laden if he was ever found in Pakistan. And Pakistan agreed to oppose the raid as a smokescreen to cover up the agreement. A former senior U.S. official, said to have inside knowledge of counter-terrorism operations, told the Guardian newspaper that ‘there was an agreement’ between former U.S. President George Bush and Pakistan’s then leader General Pervez Musharraf. ‘If we knew where Osama was, we were going to come and get him,’ the anonymous official said. ‘The Pakistanis would put up a hue and cry, but they wouldn’t stop us.’

So God knows how many more secret deals were made by the ex dictator to the detriment of country’s national interests.·

THEY SELL THE COUNTRY &

THEY SELL IT DIRT CHEAP

In our issue of December 8, 2011 we put up a post titled The Fatally Flawed Northern Distribution Nightmare  in two parts.

The writer in his post highlighted the risks invloved in US position on supplies to the US forces stationed in Afghanistan. In the end the writer David Trilling concluded that all said and done, US has had no other option but to revert to Pakistan for the ongoing war in Afghanistan. As says Trilling in that post ‘Pakistan is not the problem but a solution to the problem’. Unfortunately this aspect has never been assessed by our leadership. All what they have been doing is to negotiate superficial, personal [family] oriented deals with their counterparts in Washington… And these deals never did help the people.Sometimes it were our military men who extracted maximum benefits for their own personal gains and at other times it were the civvies who made a mess of every thing. Starting from General Ayub Khan upto Pervez Musharraf we see an array of generals staging coup d’etats and then turning from salaried individuals to industry tycoons or into estate billionaires in Pakistan and or abroad; which is why during such times that Pakistan was in most befitting position to conclude highly advantagouus deals, our leaders just yielded to secure petty [for the nation]but hefty gains for their owns persons and their families. 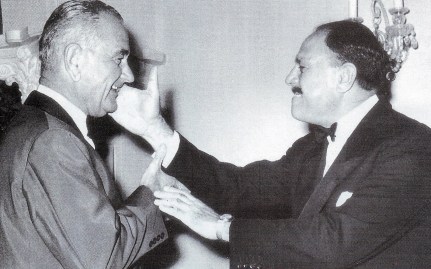 President Johnson of USA and the Pakistani President Ayub Khan. Such was the frankness in those days. But this frankness, this very cordial relationship between the two did not help  the people of Pakistan to the least. It was, though translated into hefty benefits for the Pakistani president’s family. But the country was made to pay the price when USSR (then America’s sole rival) staunchly opposed Pakistan’s stand on various issues in the UN Security Council and heavily aided India,  Pakistan’s arch enemy both militarily as well as in many industrial/economic mega projects..

Late Gen. Ayub offered all out support to Washington in the cold war. He even permitted Americans to establish their military bases in Pakistan. The air base in Badaber near Peshawar was one such base from where the U2 spy plane took off to gather intelligence information against the Soviets. The plane was shot down in the USSR and the Soviet leader in those days had threatened Pakistan to wipe out Badaber from surface of the earth. But what what did we gain, except some military hardware we gained absolutely nothing – But yes our government did gain a lot – our president transformed himself from a salaried officer of Pakistan army to an industry magnate. No wonder that the US weekly ‘Time’ declared our president in those days as the richest president in the world. Yahya Khan(left) pictured with US president Richard Nixon. Yahya was president of Pakistanf from 1969 to 1971 following the resignation of Ayub Khan who had promoted him rapidly through the ranks of the army and hand-picked him as his successor. He was already Ayub Khan’s most loyal lieutenant, and was promoted over seven more senior generals, in 1966, to the army’s top post. His presidency was faced with the challenge of trying to unite a divided country, with its eastern wing rebelling against the western part. Unable to resolve the dispute politically, largely due to the intransigence of the leaders on both sides, he waged war on his own people. Yahya did nothing to stop the crisis in East Pakistan and as a result Bangladesh became independent in 1971. Yahya, as such became the last President of a united Pakistan.

His successor Yahya Khan took over power from Ayub Khan. Though he too might have indulged like his predecessor into amassing wealth at the expense of the people of Pakistan, yet the crisis in East Pakistan did not allow him enough time to do so. Yahya not only mismanaged the affairs of the state but also so stupidly handled the crisis in East Pakistan that it ultimately sought secession and finally got independence [as Bangladesh].

Next in the line was our Mard-e Haq, Zia-ul-Haq. Under his dictatorial thumb, the so called Islamisation policies that he enacted at the expense of the welfare of the pakistani masses, Pakistan was almost a vassal state fighting America’s war in Afghanistan against her sole rival, the erstwile USSR.

General Ziaul Haq, a close ally of the United States in her war against the former USSR, sidetracked the democratic process in Pakistan creating thus space for religious extremists. and his influence still casts a negative drain on our politics. His 11-year rule is remembered as an age of dictatorship, extremism and fanaticism. The blasphemy law, Hudood Ordinances and the establishment of the Federal Shariat Court were among General’s most damaging laws. Zia formed a parallel judiciary by establishing the Federal Shariat Court, and his education system narrowed pupils’ minds.” His decision to ban political parties from elections created a political space that was filled by religious extremists.

So certain generals who were  party to the shady deals, the president himself notwithstanding, accumulated vast riches through clandestine sales of military hardware meant for the Mujahideen fighting the war in Afghanistan. Added to this was the ‘other’ money which accrued out of the fields of Afghanistan and fontiers regions in Pakistan. Full dividends were received out of the symbionic relationship that existed then between our generals and the CIA.

BUT WHAT DID WE GET?

Extremism in our socio-political culture, religious bigotry, widespread use of heroin all over the country, and a continuous spate of scud missile attacks in the borderlands of Pakistan.

In a dubious journey of rags to riches, the former dictator and now the self pro claimed messiah of the people of Pakistan, General (retd) Pervez Musharraf, is a billionaire. There is no indication as to how he became fabulously rich but the retired general has billions in offshore accounts besides the property that he has already purchased in foreign lands or inside Pakistan. Musharraf, who intends to return to Pakistan after seeking the required guarantees from Washington and Riyadh, has a lot of money to spend for his political campaign and his launching himself as “the best option for Pakistan”. A source, having a close association with the former dictator, confided to a Pakistani newspaper that Musharraf has at least seven to ten offshore accounts in Dubai and London containing huge cash in dollars, sterling pounds and dirhams.

Enters Pervez Musharraf and the man sells country to the US interests and in rerurn what do we get! Suicide bombings, incessant drone attacks, killing our innocent civilians for no fault of theirs, a continuous internal war between Salfi extremists and our armed forces. Coupled with these is the danger of a destabilised state – hitting at the very roots of the nation state of Pakistan. Its in this context that am afraid this time too our leaders will once again betray the people as they have done it in th past.

For supply of goods and services to the US and ISAF forces in Afghanistan, Pakistan is the only logical and economical choice, but as the things have been in our land of the pure, once again our leadership might use all the patriotc rhetoric against the United States but once it feels it can muster enough prsonal gains from Washington, it will ditch the people as they have done it before.

Seen in this context, now comes the time, when US decides that it would withdraw its forces in 2014 from Afghanistan. [Its though quite another matter that how far is Washington serious in its bid to withdaw – and how much and till when will be this withdrawal]. Will it be a complete withdrawal? [which in all probability is not going to be the case]. But even if US decides to withdraw her focres in its current shape and form, the operation will be a massive one. A massive operation ith massive risks. This massive operation and the enatailed risks is the very theme of the post which is being uploaded now.