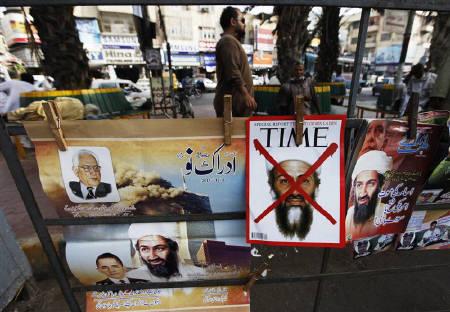 Reality has changed. Our stories have not. It is just not the dirt on our glasses. We continue to look at Pakistan with our old pair of glasses. Even as our vision has clouded, the Pakistan we see, has changed. To understand some questions on Pakistan, in India we need to abandon the official Congressi narrative. Equally, the Western mass-media rubbish about Pakistan.

CRACK IN THE MIRROR

Reality has changed. Our stories have not. It is just not the dirt on our glasses. We continue to look at Pakistan with our old pair of glasses. Even as our vision has clouded, the Pakistan we see, has changed.

To understand some questions on Pakistan, in India we need to abandon the official Congressi narrative. Equally, the Western mass-media rubbish about Pakistan.

THE CLICHÉ OF TERRORISM

On 4th January, 2011, a Pakistani leader specializing in electoral politics, Salman Taseer died. Shot dead by his own bodyguard. Exactly 4 days later, in USA, on the other side of the world, on Saturday, the 8th January, 2011, Congresswoman Gabrielle Giffords of Arizona, was shot. At a Safeway grocery store, on the north side of Tucson, Arizona, during a public event.

Both of them shot. For similar reasons, by different gunmen.

Gunmen are killing thousands in Pakistan and USA. Technically, more Americans are killed by guns in USA than in Pakistan. For instance, USA law-enforcement authorities found that ‘14,000 murders involving firearms were committed in 2005′.

Surely, it is no comfort to American victims of gunfire that they were not killed by Jihadis.

The most obvious portrayal by the mass-media is terrorist violence in Pakistan. An imploding Pakistan, with gun-toting Jihadi terrorists are convenient caricatures that hide a deep shift. To understand the shift, let us look at Pakistan – and its sponsor, ally and underwriter-in-chief.

All that seems to separate Pakistan and US of A, is a very thick wad of notes.

Politics in Pakistan is held to higher and different standards. To anyone but the most biased or blinkered, it is clear that there are political and economic objectives that drive Pakistani rulers. Just like other rulers of the world.

When looking at Pakistan, don’t use Western notions like a two-party collusive democracy is better than one-party conspiring oligarchy? Instead of one-party ‘dictatorship’ of China or a ‘two-party’ democracy in the West, there are more Pakistani players, each jockeying for power, differently. According to ‘modern’ political standards, in a very messy manner.

There is an on-going power struggle to control Pakistan’s atom-bombs, wealth, people, natural resources et al. Four Pakistani groups are in the fray. What Pakistani leadership is doing, is competing with each other to grab power. The anti-India hysteria, alleged Islamization of Pakistan, the radical elements being a lunatic fringe or the mainstream, is just that much baloney.

Among the competing groups are, first the army and the ISI combination. Then there are the popular politicians who participate in elections. Add the third element – mullah-madrasa-mujahid combine of fundamentalist clergy, including the terrorist groups – like JeM, LeT, Al Qaida, various Taliban factions et al.

The economy and wealth is in hands of the fourth element – the 22 families that matter in Pakistan. Mahbub-ul-Haq’s “22 families” speech in Karachi in 1968 highlighted the power and wealth of a few families in Pakistan.

And bringing up the rear, is the fifth part of Pakistan, who don’t matter.

The Rest of Pakistan.

As the events like the one in Abbottabad show.

Any regime that can dictate terms to USA, China, Saudi Arabia, like Pakistan has, is a skilled leadership. US, China and Saudi Arabia renew their loyalty and friendship vows with Pakistan every week – with both words and money?

Pakistan’s ability to keep its super-power allies on their toes is a remarkable diplomatic achievement. To remain a nuclear power, after near-universal condemnation and pressure reconfirms its diplomatic prowess. Pakistani leadership, has used the State and its institutions, for keeping a grip on power.

USA, China, Saudi Arabia have been able to do little about Pakistan, apart from some squealing, public name-calling. In the end they paid up. Each time. For 60 years.

That is what matters.

Pakistan is what Pakistan does. Europe is what is it says it is – and what Europe does, does not matter.

Like ‘freedom’ in the USA, with 20 lakh prisoners – the largest prison population in the world? Or ‘religious tolerance’ like single-faith Switzerland where a third mosque with minarets was not allowed? Maybe, build on ethnic-diversity like the Danes who want to pay Muslims to leave Denmark. Why not even aim for a ‘fair’ legal-system like Britain, where hundreds of thousands of people have been arrested to build a DNA data-bank – ostensibly to help in criminal identification. Or Italy believes it is all right to ban kebabs and other ‘foreign’ food to protect Italian cuisine.

The West today has the lowest levels of ethnic, linguistic and religious diversity – and persecutes whatever little is left, like the Roma Gypsies for example. Italy cheers for Berlusconi who is willing to take global frowns on the finger-printing of Roma Gypsies. Apart from Berlusconi’s Italy, Sarkozy, is a part of the French vanguard to deport “700 members of the Roma Gypsy minority, to Romania and Bulgaria, as part of its controversial crackdown on communities officials hold responsible for criminal activity.”

Sarkozy has encouraged French law-makers to prescribe dress-codes for the French. Sarkozy’s laws sez ‘no burqa’ for French Muslims. The French feel let down because “immigrants were supposed to blend harmoniously into society and not exist in separate communities” – and they did not. Angela Merkel says ‘nein’ to multiculturalism.

Like the world is able to digest Europe’s xenophobia, Pakistan’s fundamentalism is not significantly different. Except that the West is far richer than Pakistan. Yet it dances to Pakistan’s tunes.

What is keeping these four Pakistani factions busy?

While America and European oil demand is huge, it is not growing. For instance US oil consumption between 1973 – 2010 has grown from 17 mpd to 19 mpd – with some peak and collapses. Growth in oil consumption by India and China is the only sure bet. And that oil is coming from Central Asia. Through Pakistan and Afghanistan.

There are big American and European business interests in Central Asia. It means that Pakistan and Afghanistan become crucial to Big Oil. The various political factions in Pakistan are competing to assume power for a bargaining position with Big Oil – and India. This trade is expected to cross trillions, over the next few years. From this US$trillion-dollar opportunity, no political player in Pakistan, wants his cut to be diluted.

To this oil opportunity, add narcotics trade. The Golden Crescent (Iran, Afghanistan, Pakistan) and Golden Triangle (Thailand, Laos, Cambodia) are the largest producers of drugs – and expect massive returns on drug trade. This drug traffic is now passing through Pakistan. The Taliban have extensive experience with opium trade in Afghanistan.

THE US WANTS TO BE AN HONEST BROKER

What will be US role, if India and Pakistan were to sit down and resolve their issues. It is in US interest for instance, to create false stereotypes of Pakistanis – which we have examined earlier. Is the world likely to allow NATO and US, a free run of Af-Pak region, if it was declared that Pakistan was a peaceful country? Or that the scale of tribal violence in Pakistan was on a scale smaller than gangsta and ghetto violence in USA.

To maintain presence in Af-Pak region, US is using the FUD technique – create Fear, Uncertainty andDoubt. What if Pakistani nuclear devices fall in Taliban hands. What if Pakistan itself falls into Taliban lap?

What might change is the way power is shared. The Taliban may become a part of the Pakistani ruling class. How that will happen remains to be seen. A coup? Local elections, maybe. Electoral alliance? Pakistani power-equations are changing. How these equations work out, may surprise us. Some answers, we have. For some haze to clear, we will need to wait. For some outcomes, we must be prepared.

4 replies to “Pakistan. The Calculus has Changed [Viewpoint India]”