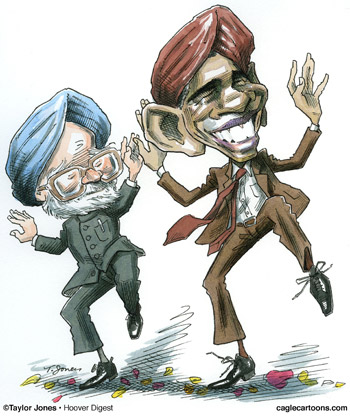 A realistic analysis of the India/Pakistani peace process would have to proceed on the assumption that the primary beneficiary will prove to be America. If a deal between them is brokered by the US State Dept., by the Dept. of Commerce, or by the Pentagon, everyone should understand by now exactly where the big pay-off will go.

Mr. Singh is proving himself to be even more of a dupe than Zardari. Nobody really expected anything less from Mr. Ten Percent, but the world put high hopes on Manmohan Singh. Obama wants India and Pakistan to play nice, so that he can pretend to withdraw from Afghanistan, while leaving both of them (and the rest of the regional players) holding the bag after 2014.

THE FASCIST “BAIT AND SWITCH STRATEGY”

The Indian analyst who authored the following piece (SEE: India, Pakistan, and God’s geostrategic will) is probably giving an accurate assessment of his government’s opinion of the current status of the Pakistani military, even though both his opinion and the projected government position are probably miscalculations or misinterpretations of Pakistani gestures. He interprets recent moves and counter-moves by the Pak. Army and its “Islamist” paramilitary forces as signs of weakness, thereby justifying taking advantage of the new “peace process” as an opening for India to seize-upon, in order to exploit those perceived weaknesses.

Like all Indian analysts, Praveen Swami makes a lot of assumptions, based on the understanding that Pakistan is “besieged on all sides,” without ever acknowledging either India’s hand in that siege or America’s primary role (or for that matter, the British or Israeli hand). You will never hear or read an Indian writer discussing outside sponsorship of the violence which plagues parts of Pakistan, even though many Western and Pakistani writers have examined Indian/American support for anti-Pakistan terrorists in depth (SEE: The Stunning Investigative Story on the Birth of Balochistan Liberation Army).

The truth is, Pakistan the Nation probably is on the ropes, even though the Army is as robust as ever. Through a clever combination of economic incentives and state-sponsored terrorism (compounded by successive, near-fatal blows from Mother Nature) Pakistan has been economically crippled and branded as an international pariah state.

The “peace process” has been sold to Pakistani leaders as a doorway out of this hellish existence, into the arms of the “community of nations,” even though entry will only be possible if Pakistan kneels before the Imperial dictates of the United States and its Indian proxies.

Pakistan’s biggest problem is its history with the CIA. For more than thirty years, Pakistan has served as the CIA’s terrorist/jihadi laboratory, the place where the spymasters have perfected their art of “Islamist” destabilization. This is the behavioral science of motivating indigenous Muslim populations to overthrow their own governments.

From the many years of practical experience that has been gained in Pakistan, the CIA mind-benders have established a working formula of “Islamist” agitation of highly religious, though under-educated Muslim populations, that takes advantage of the weaknesses in human nature itself, to cause the populations to rise-up against their own governments, demanding that those legitimate governments enforce a system of corrupt “Shariah Law” upon them.

This “peace process,” much like the failed Israeli/Palestinian peace process, is a delusional process, used to sell the participants a false “bill of goods” as the only “road map” to peace, even though it only leads to war.

Pakistan has many times seen the Islamist armies that it has trained turn against its trainers, usually for failure to live up to the Jihadi standards that they were taught. These disaffected Jihadis then become active enemies of the state, such as the TTP in Waziristan and Swat. These reversals have happened under the watchful eye and protection of that same State. It is a moot question, at this point, whether the Army and ISI were willing players in all of this, or whether they too have fallen victim to American psywar games. It is a process that has played-out in too many countries to be written-off to the workings of fate—the CIA mind games could never succeed without willing participants among the homeland populations.

Pakistani leaders have sold Pakistanis out, just as American leaders have continually sold Americans out. It is the way of the Evil Empire. You must invite the vampire into your house before he can drink your blood.

Now that this so called Islamist army has become fully activated as true enemies of the State, they work toward the same goals as the Baloch Liberation Army in the south, the destruction of the legitimate, democratically elected government of Pakistan. Both puppet (proxy) armies dance to the same puppeteer’s tunes, but they believe that they are fighting for either Allah, or for country. This is the glaring hypocrisy of the American Hegelian dialectic–the American government is continually building things up, to later knock them down.

Pakistan is suffering from a traditional pincer movement, but since they appear to be completely opposite in nature, with completely different goals, we tend to ignore the connection. The AfPak region, more specifically, the Pashtun belt of that region, is being squeezed into a fluid, homogeneous mass, which can easily be pushed back and forth, to erase the invisible border which impedes American actions.

But you will hear about none of this from an Indian analyst.

American analysts are different, in that we analyze the Imperial plans from an American nationalist perspective. Taking a patriotic angle, we look for weaknesses that will help us slay the Imperial Beast that has taken over our government and has been set loose upon the world. We have become a fascist power in our effort to reshape the world, and realistic American analysts understand this. Any useful analysis of world events must be based upon that premise.

The fascist power operates through a traditional “bait and switch” strategy. They promote “Democracy” throughout the world as the primary weapon of destabilization, with the intent of crushing the results of any democratic movement in the end. We use it as bait, to tempt the targeted audience with unimagined political freedoms which will never materialize, holding them up as promised rewards for them risking their own lives in mass-movements to reform their own governments.

The switch comes after the regime is forced to change, whenever the democratic-revolution is exposed as an exercise in American Imperialism, giving the Empire veto power over any “democratic” decisions made by that government or the people they claim to represent. After the dust of “regime change” has settled, the next American puppet government rules for as long as it can continue to repress the people. Any elected government that doesn’t adhere to this rigid fascist formula becomes itself the next subject for regime change.

A realistic analysis of the India/Pakistani peace process would have to proceed on the assumption that the primary beneficiary will prove to be American. If a deal between them is brokered by the US State Dept., by the Dept. of Commerce, or by the Pentagon, everyone should understand by now exactly where the big pay-off will go.

Mr. Singh is proving himself to be even more of a dupe than Zardari. Nobody really expected anything less from Mr. Ten Percent, but the world put high hopes on Manmohan Singh.

Obama wants India and Pakistan to play nice, so that he can pretend to withdraw from Afghanistan, while leaving both of them (and the rest of the regional players) holding the bag after 2014. Obama wants you to build and protect TAPI, which is to be the first of many pipelines on the strategic corridor to Central Asia, otherwise referred to as the “Silk Roads.” Obama wants India to fill the great void of the former Soviet space with warm Indian bodies, some tending shiny new American-made jet fighters, others slaving in the elements on Indian road crews.

Obama wants Indian telecommunication companies as well as construction companies to help energize the CIS space, especially to build the currently non-existent road and rail networks needed to assimilate the resource bonanza. India does stand to reap enormous financial rewards from this, if it will consent to transferring its developing industry into Central Asia, away from the Indian homeland, where it is needed even more urgently.

In Central Asia there are not enough roads because there have never been enough people, as opposed to India, where perhaps half a billion people suffer from economic deprivation that is exacerbated by a lack of development and the great investments which come with it.

Obama wants all of Afghanistan’s neighbors to lend full support to the hidden American plans, without ever revealing what they are, always with the promise of rewards beyond measure for unquestioned collaboration in that unrevealed plan. He sells them a message of Hope, resting upon an appeal to Blind Faith in Americans and their inescapable commitment to do the Right Thing. This is the formula for the fascist “snake oil” that Obama is peddling to get his way in the world.

The leaders of both Pakistan and India must be prepared to turn away from the American bait and switch operation at play in Afghanistan, if they want to survive without suffering through violent repercussions for their partnerships with the devil. All Nations with peoples yearning to be free must be prepared to turn away from the fraudulent con-games which pass for world government these days, before the devil can ever be brought to his knees and humanity can finally learn what it means to be truly Free.

3 replies to “Investing Your Future In a Poison Peace Process”