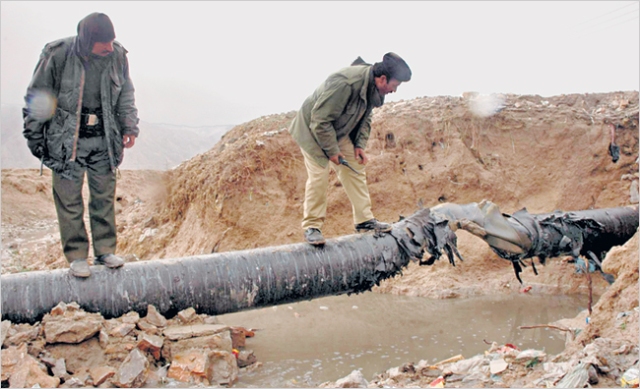 Tariq Saeedi with Sergi Pyatakov and Tamara Orlova in Moscow. Additional reportingby Qasim Jan in Kandahar and GN Brohi in Kharan and Nushki

Lucky breaks come when you least expect them. A major break presented itself recently, revealing the involvement of the USA and India in the terrorism spate in Pakistan and Afghanistan. We will come to it near the end of this narrative.

When working on this series of investigative reports, we understood early the need to think out of the box.

In an attempt to think out of the box we decided to consult an atheist. It was on his prodding that we went back to the field and found something big.

Vitaly was a professor of gosateism (state atheism) at the now-defunct department of atheism at the Moscow State University (MGU).

An atheist by choice rather than opportunism, Vitaly is as knowledgeable about Islam as any well- educated and well-read Muslim scholar. To bolster his argument, he can quote verses from the Koran and the sayings of The Prophet from memory. The fundamental difference between Vitaly and a Muslim scholar is that Vitaly studied Islam to debunk it. In several interviews, we discussed suicide bombing with him.Our first report in this series (‘Final Solution’ Frenzy – Part One: From Afghanistan with Love) was the basic raw material from which we expected Vitaly to come up with a plausible explanation as to why some young people would agree to act as suicide bombers.

In that report we mentioned that the Americans were running at least two training camps in Afghanistan, they were most probably preparing the kind of young people who looked like Muslims but acted otherwise, quite possibly some young men who looked like Taliban were being transported in American helicopters to areas near the border with Pakistan, automobiles were being stolen or snatched at gunpoint in Balochistan and some of those vehicles were being used in the acts of terrorism, there were huge numbers of unregistered automobiles in half of the Pakistani province of Balochistan, and there was a wide corridor in Balochistan that was being used by different kinds of people for illegal traveling between Afghanistan and Iran.

Here we present the essence of our conversations with Vitaly in the form of question-and-answer sequence:

QUESTION: Before we discuss the process of suicide bombing in Afghanistan and Pakistan, could you please give us some insight into non-personal acts of suicide in general?

SUICIDE ATTACKS ARE NOT EXCLUSIVE TO RELIGION –ANY RELIGIONAT ALL

IT IS A MINDSET THAT CAN BE INDUCED OR ACQUIRED

For instance, Jim Jones and 909 of his followers committed mass suicide in November 1978 in Jonestown, Guyana. Except for 9-11, it was the largest number of American casualties in a single event. Jones and his followers described themselves as communists, and in their last will they left assets worth more than US $ 20 million for the Soviet Union. Their mass suicide can be described as an act of desperation and retreat.

The Kamikaze pilots blew themselves – and the enemy – to pieces not for God but for the King and the country.

The Tamil Tigers have their land and their political agenda, not God, in mind when going for a suicide mission.

As far as organized religion is concerned, it is susceptible to manipulation after reaching the inevitable stage of ‘intellectual coma.’

It was the intellectual coma that generated the early waves of crusaders to their sure death.

QUESTION: How do you define intellectual coma?

Vitaly: Intellectual coma is when an organized religion gets disconnected from spirit. It is the triumph of form over substance. It is when the written and spoken word of scholars divides the adherents instead of uniting them.

For example, when Saladin was knocking at the doors of Jerusalem in 1187, the Christian scholars were debating in earnest whether Jesus Christ was the son of man or God. In 1258, just 71 years later, when the Mongol armies under Helegu were entering Baghdad, the Muslim scholars at the main square were contesting hotly whether crow was halal or haram.

QUESTION: How does it relate to suicide bombing in Islam?

Vitaly: Suicide as such is probably not permissible in Islam. In one of the early battles of Islam, a companion of The Prophet fought valiantly and got seriously wounded. The onlookers praised his bravery but The Prophet said that he may end up in hell. This made some listeners wonder and they kept an eye on the wounded companion to see as to what he would do next. A few hours later, he committed suicide in his tent.

This incident is universally quoted by the body of Muslim scholars who speak against suicide.

However, it is possible to divide the act of suicide into two categories i.e. the permissible and the forbidden. For instance, a convincing case can be built that commitment of suicide to escape despair, law, shame or pain is forbidden while suicide as a tactic in asymmetrical warfare is permissible.

Regardless of the doctrinal stance one takes on this issue, the persistent occurrence of suicide bombing in Iraq, Afghanistan and Pakistan demands different treatment. Looking at the complexity of the situation, one needs to be mindful of external and internal manipulations.

To expand on this point, I would like first to give my personal understanding of Islam.

In the early texts, Islam was referred to as path (deen) – a very wide path – and the preference to walk on the right or left, or in the middle, of that path was defined as mazhab. It is only when public debates on religion became a fashion that Islam came to be referred to as mazhab.

You may rightly ask as to what difference it makes.

The sheer bulk of literature in Islam that appeared after the sacking of Baghdad, veered away from the main path, the deen. It was denial and retreat.

However, just read the Islamic literature created during the last seven hundred years. Except for some notable exceptions, the general impression is that everybody is going to hell except for a chosen few. Based on the bulk of literature produced during the intellectual coma, it appears that it is nearly impossible to please the God of Islam.

The Islamic literature of the past few centuries promotes hopelessness instead of hope. The scholars, by and large, don’t offer optimism; they dispense fear. This is one reason why it was easy to convince people of the validity of atheism in Soviet Union.

Looking at the main body of Islamic literature, it seems that paradise is a small island, able to accommodate just a handful.

It also gives the impression that God is an angry old man, taking pleasure in committing people to eternal torture, creating them merely to throw them into the hell. Considering that every author recommends every other author for hell, the Islamic paradise would be one lonely place.

When a common Muslim looks at the presumed demands made on him, he sometimes loses all hope and starts looking for a shortcut to heaven.

This opens door for internal and external manipulation. Suicide can be billed as cheap ticket to paradise. Ka-boom, and you are there already, in the company of eternal virgins along the banks milk and honey rivers.

This is just one of the several reasons why someone would agree to become a suicide bomber. I will come to another, more relevant reason, in a minute.

Next: Rendezvous with Final Solution

Wonders of Pakistan supports freedom of expression and this commitment extends to our readers. Constraints include comments judged to be in violation of WoP Comments Policy. We also moderate hate speech, libel and gratuitous insults.