“Tim Osman” was the name assigned to Osama bin Laden by the CIA for his tour of the U.S. and U.S. military bases, in search of political support and armaments. […] There is some evidence that Tim Osman … visited the White House. There is certainty that Tim Osman toured some U.S. military bases, even receiving special demonstrations of the latest equipment. Why hasn’t this been reported in the major media…? The answer is that the US is now obsessed by the Afghan war i.e. operation Geronimo, and therefore the western media too put a blind eye to OBL’s days with the CIA.

THE BEAR TRAP IS SPRUNG

He allowed a free hand to the CIA approved Wahabi Islamic doctrine to gain a firm foothold in Pakistan. Passing pro-Islamic legislation, he allowed FIB (Faisal Islamic bank) to start Islamic banking systems, and created Islamic courts. Most importantly, he imposed a new religious tax which was used to create tens of thousands of madrassas, or religious boarding schools, where “Islamic text books’ printed in USA and approved by CIA were taught. These schools would be used to train and indoctrinate a large portion of future Islamic militants using courses developed in the USA.

“Radical Islamist ideology began to permeate the military and the influence of the most extreme groups crept into the army,” writes journalist Kathy Gannon in her book ‘I is for Infidel’. The BBC later commented that Zia’s “Islamization” policies created a “culture of jihad” within Pakistan that continues until present day. Meanwhile ISI took over to continue the field work and launched a massive campaign of terrorism, assassinating hundreds of teachers and civil servants in Afghanistan.”

For Iran, in November 1978 former Under Secretary of State George Ball was appointed as advisor to President Carter! This is most amazing for he was known to hold the view that the US should drop support for the Shah of Iran in favor of the radical Islamist opposition of Ayatollah Khomeini. Later during his exile The Shah would note with bitter hind sight,” It should have been clear to me that the Americans wanted me out. What else was I to make of the Administration’s sudden decision to call George Ball as advisor on Iran?” 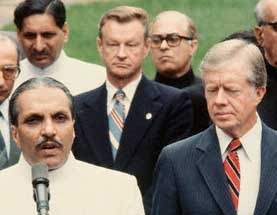 For Al-Qaeda around 1978-79 (the details are fuzzy) Osama Bin Laden visited the US and Britain -or both -ostensibly for the treatment of his son Abdul Rahman born with hydrocephalus. However the required treatment-an operation – was never carried out. More likely he went there to get his final briefs first hand!

Ayatollah Khomeini returned from exile in France on January 16, 1979.By February Shah Mohammad Reza Pahlavi is deposed and Ayatollah Khomeini took over as Iran’s new leader. At first the US was taken aback by the new fundamentalist Islamic government, and Brzezinski contemplated a military coup to stop Khomeini. 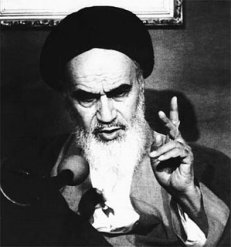 In March, there was a major revolt in Herat province. Russian Intelligence noted that it had support from outside-particularly Iran. This convinced Brzezinski that Khomeini was fiercely anti-communist, and he soon decided that Iran’s new government can become part of his “arc of crises. The US embassy remained open, and more US officials came to Iran to begin tentative talks. The CIA started working (re-working) with Iranian intelligence to destabilize the pro-Soviet government in Afghanistan.

By April 1979, US officials start having their first meetings in Pakistan with opponents of the Afghan government. Robert Gates –a junior officer then, but later to become CIA Director – recalls that in one such meeting on March 30, 1979, Under Secretary of Defense Walter Slocumbe wondered aloud whether there is “value in keeping the Afghan insurgency going, ‘sucking the Soviets into a Vietnamese quagmire.’”

In May, a CIA special envoy also meets these Afghan Mujahideen leaders at Peshawar. All of them have been carefully selected by the Pakistani ISI. One of them is Gulbuddin Hekmatyar, a drug dealer, and brutal warlord. His extreme ruthlessness is considered a plus. Over the next 10 years over half of all US aid to the Mujahedeen will go to his faction. In June /August there are further large scale army mutinies within Afghanistan.

According to the official US version CIA aid to the Mujahideen began after the Soviet army invaded Afghanistan. However President Carter had formally approved covert aid in July. And as Brzezinski’s confessed later on: “that very day, I wrote a note to the president in which I explained to him that in my opinion this aid was going to induce a Soviet military intervention”. Charles Cogan, who later headed the CIA covert aid program to Afghanistan, will call Carter’s approval on 6th July a “very modest beginning to US involvement.” In fact, this is not correct because the’ Safari Club’ along with the ‘rogue CIA’ had been aiding the rebels since well before 1978.

Meanwhile, Hafizullah Amin overthrows Daud in a military coup in October 1979, and invites the Soviets.

In early November 1979, Brzezinski had secretly met with Iranian Prime Minister Mehdi Bazargan, as well as Iran’s foreign minister and defense minister, in Algiers. But shortly before the meeting, the US agrees to allow the Shah, dying with cancer, to come to the US for medical treatment. Khomeini is enraged, and on November 4, just three days after the Algeria meeting begins, students take over the US embassy in Teheran. Brzezinski’s (Safari Club’s?) attempts to create an alliance with Khomeni’s Iran collapse.

On December 8, 1979 the Soviets invaded Afghanistan; surprisingly on December 26 Russian troops turn against the invitee and kill him! Later declassified high-level Russian documents show that the Russian leadership believed Amin to have had secret contacts with the US embassy and was probably a US agent; and that because of this “the right wing Muslim opposition” has “practically established their control in many provinces… using foreign support.”

They therefore installed a communist regime led by Babrak Karmal which was openly hostile to Pakistan. The Russians will later be proved correct when in a 1998 interview, Brzezinski, revealed that earlier in the year Carter authorized the CIA to destabilize the government, provoking the Russians to invade and later topple Amin’s government! It seems Russia had been invited into Afghanistan by a Khomeini cultivated US agent – even though Iran was no more a part of the team!

Brzezinski wrote a memo to President Jimmy Carter after the Soviet invasion suggesting that success in Afghanistan could give the Soviets access to the Indian Ocean. He advised that US should continue aid to the Afghan Mujahideen. He also added, “This means more money as well as arms shipments to the rebels and some technical advice.” He concludes the memo with, “[W]e must both reassure Pakistan and encourage it to help the rebels. This will require a review of our policy toward Pakistan, more guarantees to it, more arms aid, and alas, a decision that our security problem toward Pakistan cannot be dictated by our nonproliferation policy.” Carter accepted Brzezinski’s advice. Pakistan would be rewarded to become a nuclear power in exchange for help in implementing Brzezinski doctrine of Islamic Militancy!

Over the next decade CIA and Saudi Arabia would channel a huge amount of money through ISI, (estimates range up to $40 billion total for the war) to support the Mujahideen guerrilla fighters opposing the Russians, forcing the USSR into a decade-long war which it could ill afford. It was as Brzezinski insisted, a war that brought about “The demoralization and finally the collapse of the Soviet Empire”. In my next article I shall show how this covert operation involving ‘radical Islamist militants’ was developed and implemented by CIA.

[This concludes the first part of this series of posts. To continue reading the second part, click here].