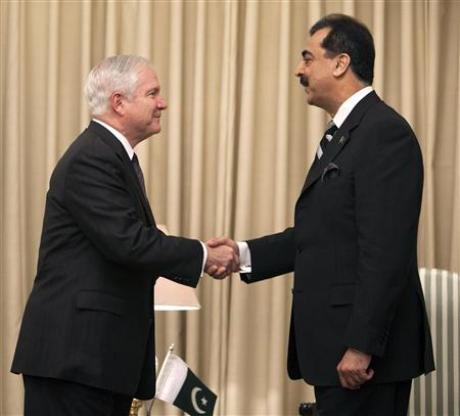 [Note for WoP readers: In international relations nobody does anything for anybody without a return for the friendship or alliance [help, favor, trade or aid, whatever name you may give – to such relationship]. History is replete with such similar pacts, alliances and understandings. But in our case, it has mostly been a one way affair. Historically we have always been the US most allied ally, yet it has mostly been the Pentagon and the US military industry complex which got the maximum benefit and what “we” got were “the peanuts”. For this, however, I do not blame much on American politikers but its more because of our own men, of the past or the present occupying the throne of Islamabad. Unfortunately most of them were  the men in khaki who signed such instruments of abject surrender before the US administrations, merely because they could thus not only retain power but also indulge themselves into luxuries which otherwise they could never do, with their kleptomaniac hobbies – which they have now turned into a complete art of grabbing, looting and amassing their ill begotten wealth and then depositing these in European and US banks.

We played into their hands then and we still are playing into their hands now. The US imperialist neocons who have set an agenda since Reagan era to introduce their new world order, of which a very vital part is dismantling Pakistan, a continuously unstable middle east and consolidating their hold over this oil rich region through their lackeys in Pakistan and other Muslim countries who unfortunately are available in abundance in the Muslim world.

I am not arguing here for a confrontation. America by and large is a democratic country with its finest institutions in academics, administration and military science. Americans basically are democratic in their approach. Lot of people in US media are projecting our cause more sincerely than we Pakistanis do for ourselves

But once it’s a matter of chalking a route for our destiny, then it’s us and us alone to decide. We can’t blame others because no one can force a sovereign, independent Pakistan to do what others may wish it to do; until and unless the greed and the lust of the power holders- breakers and brokers in Islamabad makes them to sign such instruments [which however, does benefit that tiny lot of our men in khaki and civil] – all at the cost of ordinary poor folk of Pakistan. Nayyar]

What did recent Gates visit bring to us?

US secretary of defense Robert Gates has come and gone, after making the noises so pet with American officials nowadays about Pakistan. But hadn’t we heard of this American prattle even when they were fighting a proxy war against the Soviet invaders in Afghanistan? Didn’t they declare us even then the frontline state of their war, which we actually had become foolishly, thanks to a military dictator, General Zia ul Haq, who threw this unfortunate nation into that foray to be clobbered and bled just to earn international legitimacy for his own illegitimate usurpation of power? Weren’t we then too charmed by Washington with hymns of strategic partnerships and long-term relationships? Weren’t we then too pledged $4.2 billion in US military and economic aid?

What came of all that once the Soviets withdrew from Afghanistan? Well, we don’t want to recall that sorrowful history, lest we embitter the sweet taste of Islamabad’s hierarchy, rollicking in such a binge of exultation and celebration as if they have pulled off a feat that no Halaku Khan of this earth could. Otherwise, the way we are being dealt by protagonists of this America’s so-called war on terror befits not a partner or an ally but only an exalted valet. And for the humiliating conditions on which the Kerry-Lugar Law has sanctioned US aid for Pakistan, not even a third-rate leadership would touch it, even if all charity. But let it pass. If our leadership feels so happy about all this, why to spoil its feel-good mood. After all, over the time this wretched nation has swallowed many an ignoble dignity inflicted on it by Americans for its leaderships’ pleasure. This poisoned chalice too it will gulp up for its present leadership to be happy.

Presently, it is secretary Gates’ discourse that we want to talk about. So nice of him to confess after the Soviet withdrawal the United States committed in the region a strategic mistake “driven by some well-intentioned but short-sighted US legislative and policy decisions”. But his confession is a stark understatement. For, as far as Pakistan is concerned, this wasn’t a US strategic mistake, not even a blunder. It was a callous and deliberate betrayal of a US-declared frontline state, which was clamped down with every nuclear-related sanction and every kind of embargo known to the American statute book and also robbed of its hard-earned money it had paid out from its own pocket for the F-16 planes never delivered to it for sanctions.

But, then, Gates’ own discourse was full of contradictions. While he harangued Pakistan that Taliban were all chips of the same block and couldn’t be compartmentalized into good and bad guys, his own people in Afghanistan are going by this categorization. What they call moderate Taliban, they admit trying wooing over. Not only are they talking to them. At their behest, Afghan President Hamid Karzai has also unveiled a plan to buy off wavering Taliban with money and jobs. So what he wants Pakistan not to do, his people are themselves doing exactly this in Afghanistan. Isn’t it an outright hypocrisy, and also mean doublespeak and double standards?

Then, all fraught is his assertion that no matter wherever al-CIA-da raises its head, the epicenter of this monstrosity is the border land between Afghanistan and Pakistan, which if translated into plain language only means Pakistan’s North Waziristan Agency. This plainly is a misleading and specious statement. The 9/11 was not planned in North Waziristan, not even in Afghanistan. It was planned in the German city of Hamburg and was executed by Saudi, Egyptian and other Arab students, who had studied in Western universities and trained in America’s aviation academies….and CIA for an inside job par excellence….

Even the Nigerian underwear bomber who attempted a foiled blasting of an American airliner may have stayed in Yemen learning Arabic, but he believably got radicalized in London where he was long studying engineering. North Waziristan he had never visited. But such uncomfortable things never torment an American conscience as doesn’t the clarifications Gates touted with a straight about the presence in Pakistan of the thuggish American private security outfit of Blackwater. His clarifications were more a confirmation than a denial. This outfit of mercenary killers may not be on his Pentagon’s or State Department’s payrolls. But it is the CIA which enrolls and pays them. And Blackwater is heavily represented in about 100,000 hired killers CIA has on its payrolls in Afghanistan alone. The number may not be lesser in Pakistan where CIA has had a free run for years.

But if the Americans have to be duplicitous, cunning and deceivers to us, do our own people have to be so to their own compatriots? For months, interior minister Rehman Malik has been lying to this nation that Blackwater exists not in this country. Even accosting his challengers he has been to prove him wrong and he will resign. Now he must. Gates with his evasive but confirmatory versions has proved him to be a liar and a big cheat deceiving his own people.

One reply to “Gates Visit: The baits, traps, diplomacy, all to the advantage of the one & only one”