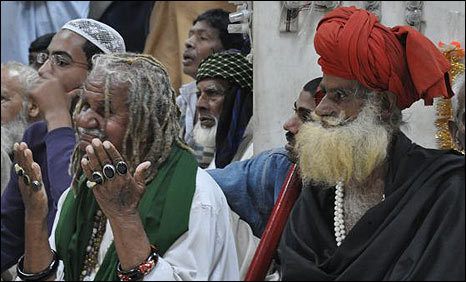 Sufism is Islam expressed in the traditions and psyche of Muslims in the subcontinent, especially those of Pakistan.

It’s one o’clock in the morning and the night is pounding with hypnotic rhythms, the air thick with the smoke of incense, laced with dope.

I’m squeezed into a corner of the upper courtyard at the shrine of Baba Shah Jamal in Lahore, famous for its Thursday night drumming sessions. It’s packed with young men, smoking, swaying to the music, and working themselves into a state of ecstasy. This isn’t how most Westerners imagine Pakistan, which has a reputation as a hotspot for Islamist extremism.

But this popular form of Sufi Islam is far more widespread than the Taleban’s version. It’s a potent brew of mysticism, folklore and a dose of hedonism.

Now some in the West have begun asking whether Pakistan’s Sufism could be mobilised to counter militant Islamist ideology and influence.

Lahore would be the place to start: it’s a city rich in Sufi tradition.

At the shrine of Data Ganj Bakhsh Hajveri, musicians and singers from across the country also gather weekly, to perform qawwali, or Islamic devotional singing.

Qawwali is seen as a key part of the journey to the divine, what Sufis call the continual remembrance of God.

“When you listen to other music, you will listen for a short time, but the qawwali goes straight inside,” says Ali Raza, a fourth generation Sufi singer.

“Even if you can’t understand the wording, you can feel the magic of the qawwali, this is spiritual music which directly touches your soul and mind as well.”

But Sufism is more than music. At a house in an affluent suburb of Lahore a group of women gathers weekly to practise the Sufi disciplines of chanting and meditation, meant to clear the mind and open the heart to God.

One by one the devotees recount how the sessions have helped them deal with problems and achieve greater peace and happiness. This more orthodox Sufism isn’t as widespread as the popular variety, but both are seen as native to South Asia. 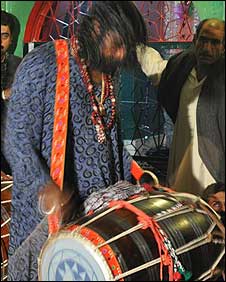 “Islam came to this part of the world through Sufism,” says Ayeda Naqvi, a teacher of Islamic mysticism who’s taking part in the chanting.

“It was Sufis who came and spread the religious message of love and harmony and beauty, there were no swords, it was very different from the sharp edged Islam of the Middle East.

“And you can’t separate it from our culture, it’s in our music, it’s in our folklore, it’s in our architecture. We are a Sufi country, and yet there’s a struggle in Pakistan right now for the soul of Islam.”

That struggle is between Sufism and hard-line Wahhabism, the strict form of Sunni Islam followed by members of the Taleban and al-Qaeda.

It has gained ground in the tribal north-west, encouraged initially in the 1980s by the US and Saudi Arabia to help recruit Islamist warriors to fight the Soviets in Afghanistan.

But it’s alien to Pakistan’s Sufi heartland in the Punjab and Sindh provinces, says Sardar Aseff Ali, a cabinet minister and a Sufi.

“Wahhabism is a tribal form of Islam coming from the desert sands of Saudi Arabia,” he says. “This may be very attractive to the tribes in the frontier, but it will never find resonance in the established societies of Pakistan.”

So could Pakistan’s mystic, non-violent Islam be used as a defence against extremism?

An American think tank, the Rand Corporation, has advocated this, suggesting support for Sufism as an “open, intellectual interpretation of Islam”. 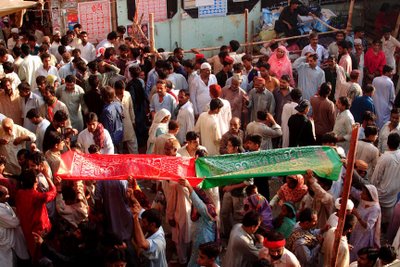 Devotees  carrying Chaddor to the shrine of Hazrat Lal Shahbaz Qalander of Sehwan Sharif in Sindh.

There is ample proof that Sufism remains a living tradition.

In the warren of Lahore’s back streets, a shrine is being built to a modern saint, Hafiz Iqbal, and his mentor, a mystic called Baba Hassan Din. They attract followers from all classes and walks of life.

The architect is Kamil Khan Mumtaz. He describes in loving detail his traditional construction techniques and the spiritual principles they symbolise.

He shakes his head at stories of lovely old mosques and shrines pulled down and replaced by structures of concrete and glass at the orders of austere mullahs, and he’s horrified at atrocities committed in the name of religion by militant Islamists.

But he doubts that Sufism can be marshalled to resist Wahhabi radicalism, a phenomenon that he insists has political, not religious roots.

“The American think tanks should think again,” he says. “What you see [in Islamic extremism] is a response to what has happened in the modern world.

“There is a frustration, an anger, a rage against invaders, occupiers. Muslims ask themselves, what happened?

“We once ruled the world and now we’re enslaved. This is a power struggle, it is the oppressed who want to become the oppressors, this has nothing to do with Islam, and least of all to do with Sufism.”

Ayeda Naqvi, on the other hand, believes Sufism could play a political role to strengthen a tolerant Islamic identity in Pakistan. But she warns of the dangers of Western support.

“I think if it’s done it has to be done very quietly because a lot of people here are allergic to the West interfering,” she says.

“So even if it’s something good they’re doing, they need to be discreet because you don’t want Sufism to be labelled as a movement which is being pushed by the West to drown out the real puritanical Islam.”

Back at the Shah Jamal shrine I couldn’t feel further from puritanical Islam. The frenzied passion around me suggests that Pakistan’s Sufi shrines won’t be taken over by the Taleban any time soon.

But whether Sufism can be used to actively resist the spread of extremist Islam, or even whether it should be, is another question.

Courtesy: Text and Photographs BBC News, however the last picture by Umair Ghani, a Pakistani Photographer and Writer.

4 replies to “SUFISM can counter the Taleban?”