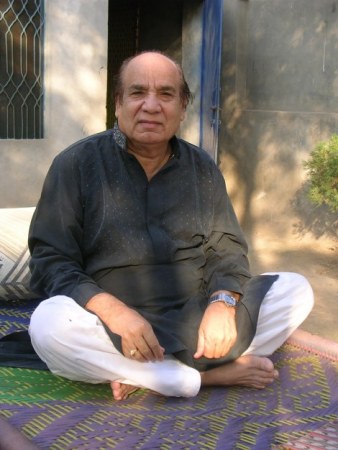 I visited Waris Shah’s mazar in 1975. There were hardly 200 or so persons attending the Urs, and the mazar was in a terribly poor shape. The graves of Baba Ji, his brother and father were also unmarked. At that moment I wished and prayed that mausoleum befitting the persona of Baba Ji be built, so I contacted the then Chief Secretary Punjab late B.A. Qureshi. Mr. Qureshi assured me his full support. A committee was formed of which I too was a member. The Chief Minister Punjab Mr. Hanif Ramay too rendered his full support to us but the main conduit to get funds for our project was Mr. B.A. Qureshi.

Every year in the last week of July the Urs of Baba Waris Shah is celebrated at Jandiala Sher Khan near Sheikhupura in Pakistan. WOP Contributing Editor Umair Ghani is a frequent visitor to this event. In an earlier post Umair portrayed the life and times of this doyen of Punjabi Sufi poets Syed Waris Shah under Waris Shah, Ishq da Waris, and the legend of Heer and Ranjha.

Although I vey much wished to attend this event but during the days of Urs, I had to be in Islamabad, so was keen to learn the proceedings of the Urs specially the details of homage paid by the people of Pakistan and all those sons of Punjab who love this saintly poet irrespective of their national, religious or regional affiliations.

I thought of meeting Prof. Ghulam Rasool Azad who happens to live near Gurdawara Janam Asthan in Nankana Sahib in a house over which the shadows of the holy Gurdawara are cast as a shade. Prof Azad is a great lover of Punjabi and Syed Waris Shah too and as I was told he regularly attends the Urs of Baba Ji in Jandiala. But then Umair told me that there is an evening at Alhamra Cultural Centre where winners of Heer Recitals in JSK are giving a live rendition of Heer. So on we go and find there some very gifted singers who recited Heer in their unique and lovely style. But the peak performance was of course given by Mme Samina Najam Hassan  and Risham Syed, respectively the wife and daughter of great living Sufi (A poet, writer and critic of Punjabi literature).

The beauty lies in rendition by Syed’s family and of reciting Heer in different ragas. Hitherto Heer has been sung only in bhairween style, a style which became almost an icon for the recital of Heer by different singers. It goes, to the credit of Najam Hassan Syed’s family that they have innovatively cast the Heer into different ragas. Mme Samina Hassan has a voice which does not sound like the voice of a typical Heer singer, yet the mastery she has, the perfection she exhibits in her art, a style of singing that you wish she may go on singing and we go on listening. Her daughter Risham Syed, and Shafqat Hussain gave her a perfect ‘sangat’ and that makes rendition of Heer almost immortal. The mesmeric singing by the trio kept the audience spellbound.

The evening is celebrated with great gusto by Lahore Art Forum. There at the Forum I met Baba Sadiq who is a staunch devotee of Syed Waris Shah and the principal organizer of the event. An ex banker, Baba Sadiq left his promising career in banking because of his love for the Guru, his mentor, his Pir and his Murshad Hz Syed Waris Shah. He is now full time devoted to propagate the thought of Waris Shah. Baba Sadiq relates the history of the event in following words.

I was serving as a manager of the Habib Bank Ltd. Railway Road Branch in Lahore, when somebody told me there was a Heer recital at Free Mason’s Hall on the Mall. I went there and it was my first listening to a Heer recital. I was so enthralled by the melody that I fell in love with the world of Heer poetry and its creator Baba Syed Waris Shah.

To find my Murshid I visited Jandiala Sher Khan (JSK) for the first time in 1975. I saw the mazar of Baba Ji in a pathetic condition. There were hardly 200 or so persons attending the Urs, the mazar had just a dilapidated boundary wall and the unmarked graves of Baba Ji, his brother and father. At that moment I wished and prayed that mausoleum befitting the persona of the great bard of the Punjabi poetry be built, so I contacted the then Chief Secretary Punjab late B.A. Qureshi. Mr. Qureshi himself was a man of great literary taste; he assured me his full support. A committee was formed of which I too was a member. The Chief Minister Punjab Mr. Hanif Ramay a superb writer of Urdu himself and a lover of Punjabi poetry too rendered his full support to us but the main conduit to get funds for our project was Mr. B.A. Qureshi.

Baba Sadiq on the doorsteps of the hujra

Mr. Hanif Ramay then allocated funds for the mausoleum. Thus construction of the final abode of Baba Ji was started and it was completed in 1978. It was at thus time that the idea struck my mind that a true image of Baba Ji be traced and this should be available to lovers of Punjabi poetry. There was a painted image of Baba Ji which was in a highly worn out condition. I took this image to photographer S.M. Khalid who is an expert in preparing true replication of old images.

I asked Baba Sadiq what was the source of this sketch and how much authentic it could be.

In 1970 one Malik Afzal a publisher of Lahore issue a special edition of a local magazine. This mag had three sketches of Baba Syed Waris Shah, namely:-

I shared the 3 pics of Syed Waris Shah with S.M. Khalid and one that we thought could truly represent the person of Waris Shah was taken as a standard after a further probing had been made on its veracity and its similarity or exactness to how the great Punjabi poet looked like in his actual life.

To proceed further with my endeavor to find a verified description of Baba Waris Shah’s real life like image, I visited Malka Hans (It was here in Malka Hans where in a hujra of a mosque Waris had compiled his Heer Waris Shah), where one Baba Chiragh Din who was then 114 years old and was one time Imam of the mosque where Waris Shah had completed his epic poem. Baba Chiragh told me that his grand grand father was a contemporary of Syed Waris Shah and whatever he had learnt from his father (as transferred from generation to generation) was most authentic and therefore reliable. The description of the life like image of Syed Waris Shah was then compared with one of the three images we got from Malik Afzal’s publication and the one which we found most similar to Baba Chiragh’s description was selected by me and the photographer Khalid, as final and authentic photo of Hz Syed Waris Shah. This very image is now taken as an officially recognized and undisputed image of Hz Syed Waris Shah.

Later, said Baba Sadiq: I set up a Cultural Centre “Jehan-e-Waris. This Centre was initially started to organize Heer reciting competitions. The first one of its type was held in 1978 which was won by one Nazeer Maseeh (a Christian by faith but a superb singer of Bhairween style of Heer recital). Now his son Suhail Maseeh, too is a good singer of Heer. Another member of Christian community who also has won the competition of Heer singing, is Liaquat Maseeh who recites Heer simultaneously on harmonium. (Liaquat Maseeh also sang Heer on Waris Shah Evening at Alhamra Cultural Complex)

In 1999, continued Baba Sadiq,  I started the Centre of Spiritual Science, at the same place (Babu Sabu Estate near Sabza-zar, Lahore). Adjacent to the Centre, is a small beautiful Library, a free dispensary and a mosque. Every year, a competition is held in the last week of July and winners are awarded prizes by Baba Sadiq. And all these activities are but an humble tribute to my mentor, my Murshid, with whose blessings am rendering these services to humanity as much as I can. Baba Sadiq ended his coverage with a piece of his mentor:-

In the Name of thy Lord,

Step along with me

For these steps of noble Thought

will lead all Good to thee,

Among Men, Bird and Genie

Editor’s note:Though I very much wished to put up recordings of Heer recitals at Alhamra Cultural Complex but I regret none was done at all. Instead I have  uploaded a Youtube video from a gathering in Faisalabad. If you like Heer in Bhairween, it’s a good recital. Listen and you will like it.

4 replies to “A Soulful Evening at Alhamra”