Leepa  is a valley of changng colours

The picturesque Leepa valley comprises of several villages, the principal being Reshian Gali, which at a height of 3600 M above sea level is also the gateway to the vale of Leepa. In addition to Reshian, there are other villages in Leepa like:-

Like Reshian, all these villages, the tiny small hamlets, equally contribute to a wonderful mosaic of patterns mother nature has so ornately and intricately woven here in this part of Kashmir.

Leepa is famous also for its typical Kashmiri style of architecture, mostly in the form of 3 storied wooden houses. A look at the houses here makes one believe, Leepa as a true extension of Indian occupied Kashmir into Pakistan.

The people in Leepa, as in other parts of Azad Kashmir, demonstrate robust character and a steadfast, a resilient way of living. Inspite of 18 years of Indian shelling and continuous fire almost every day (which takes its own tolls in terms of human life and collateral damage), and all this exacerbated by the deadly earthquake of Oct. 2005, life has gradually started turning to normalcy.

The paradise like mini Kashmir in Leepa has numerous water driven flour mills, the only kind of industry in the valley.

The valley has a population of about 75000 inhabitants who generally indulge in farming, cattle rearing and tourism related services. Nearly 400 jeeps ply daily from Reshian to Leepa and back. Jeeps are the only mode of transport in the valley though motor bikes are now also seen in ever increasing numbers on the bumpy jumpy road.

The red Kashmiri rice is grown in October by the farmers in Leepa. This is also the staple food for the people of the area. Husking of rice is done in traditional way, by first beating the rice stack with long sticks, thereafter, threshed along temporarily constructed ditches.

The highest peak is Shmasa Bari, which remains snowbound throughout the year.

Down hills, every year with coming of winter in the valley, when previous year’s snow melted on top of the mountains, soon fresh snow will be falling to interlace them all. It’s the time also when residents of this far flung vale have to brace the chilling winter  which brings heavy snow and thus brings increased hardships  for its 75000 residents. Due to lack of infrastructure, the valley is disconnected from the rest of Pakistan and Azad Kashmir.

Apple is grown in the valley in its different varieties, most popular being Golden, Delicious and Kala Kullo King. These varieties have a unique, highly tempting flavor and taste comparable to none. Walnut is another fruit grown in the valley. It too ripens in early autumn when it is collected, deseeded and then sent to down country markets where they fetch price as high as Rs 450/- per Kg. In Leepa the cost per Kg is Rs. 300/- per Kg.Though poor in infrastructure and no industry worth its name, excepting the water mills, nature has provided spectacular beauty to this valley that can surpass even developed areas of the plains if only its tourism potentials were exploited to the full.

Water in its streams is crystal clear and there is absolutely no pollution. One can breathe, clean fresh air, full of fragrance from virgin forests and wonderful scenery all around to watch.

Allover the valley, high walnut trees likewise put on attire in yellow, red and orange, which adds extra sparkle to our stay in Leepa. We also come across yellow herbs and shrubs tucked nicely into green vegetation comprising of large conifer trees, adding variety to this miracle of changing colors during autumn in the valley.

Walkways amidst jungle are filled with compost leaves signaling a momentous magnitude of autumn in the valley. The foliage from deciduous trees stays on the ground leaving a damp and decayed trail. The skyline in the whole vale transcends from ardent green to russet red, gold, orange, dark yellow and brown. Strong winds and mild storms also wreack further havoc with the delicate branches, turning them yellow and this too adds to the already damp compost like soil. A walk on these fallen decayed leaves reminds of the harsh winter ahead. Birds are also going nomadic ready to move on an arduous and long journey bracing the chilling winds on the way, to safe havens in down country areas where they can feed and breed.

Kazi Nag Nullah basin also hosts hundreds of poplar trees with ready to fall yellow foliage. Yellow chinar trees acquire a crimson hue as if on a fire, a unique view along the mountains, tracks and the valleys in Leepa.

Soon we reach Burthwar Gali and encounter nearly 300 chinar trees again with their yellow, orange and red mix of colous, shades and hues adding further fire to the panorama of winter in the valley. Local elders said, these trees were planted during the period of emperor Shah Jahan, the builder king of the famed Mughal empire – to provide shade and protection to travelers who used to journey between Srinagar and Punjab either on horses or even on foot. We couldn’t help but admire this wonder of nature which had laid down a carpet of innumerable crimson colored trees, when viewed while passing through Burthwar Gali Pass.

Appreciating the allure of autumn trees in narrow alleys is the best pastime in this vale of wonders – wonders that this picturesque valley showcases to the outside world. 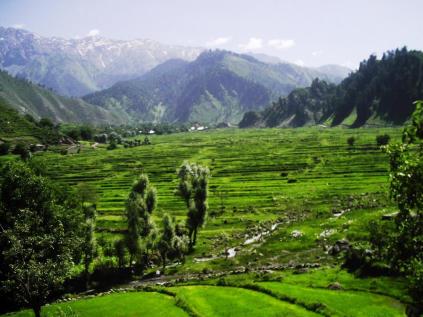 Tailpiece: Daily strolls along the fabulous terraced fields devoid of any crop at this time of the year offers you chance of a life time to enjoy nature’s beauty at its best. No words are able to describe the true beauty and incomparable sight of this touristic paradise in Kashmir.

Each year, on start of autumn in Kashmir, Leepa, which lies at a distance of about 90 KM from capital Muzaffarabad, starts to dress up in a new and richly colored attire-a mix of red, orange and yellow shades. It’s the time when apple picking season in the valley comes to an end.

11 replies to “The changing colours of autumn in Leepa”