While recognizing monuments as timemarks with a distinct aura around them and that they are older than we can imagine, stimulates us also to philosophize not only about the past and its relationship with the present but also about the eternity, about the age of humanity, the speed of history, the transience of individuals, the achievement of whole cultures and what the monuments may see in future – us for instance.

The melancholic appreciations of ancient monuments often easily acquire a political significance when ruins are taken as evidence of former glory or as fetishes for a social nostalgia. So things which are perceived as ancient and foreign must, first and foremost, make people think. This thinking process forms a significant part of their individual identity, a phenomenon which is followed by common men also.

HERITAGE – OUR IDENTITY – OUR PRIDE

WOP EDITOR EXPLAINS THE PHENOMENON THAT BECKONS PEOPLES TO SEEK THEIR ROOTS IN HERITAGE, THE PRIDE IN THEIR GLORIOUS PAST AND A MEANS TO THEIR IDENTITY IN THE CONTEMPORARY WORLD.

Archaeology enables us view our distant past at the time our life is happening before us. Monuments as long as they exist, give ever new meanings to our lives and acquire an ever new cultural significance; for they are a visible link between our present and the distant past.

Shalimar gardens are a masterpiece of the Mughal style gardens in Lahore, Pakistan. Constructed under orders of Emperor Shah Jahan in 1637, the gardens have marble palaces and mosques decorated with mosaics and gilt. The elegance of these splendid structures on three terraces with lodges, waterfalls and large ornamental ponds, is unequalled.  The Gardens were declared a UNESCO World Heritage Site, under the UNESCO Convention on protection of the world’s cultural and natural heritage sites.

As monuments pass through ages, they are appreciated according to their age value and hence are also referred to as timemarks or as Germans would call them the Denk-Mals. Denk-Mal is generally an expression of a mysterious monument which inspires people to think deep about philosophical questions associated with the beginning of humanity in prehistoric periods.

Perceiving monuments as timemarks with a distinct aura around them; while recognizing that they are older than we can imagine, stimulates us also to philosophize not only about the past and its relationship with the present but also about the eternity, about the age of humanity, the speed of history, the transience of individuals, the achievement of whole cultures and what the monuments may see in future – us for instance.

Often the melancholic appreciations of ancient monuments can easily acquire a political significance, when ruins are taken as evidence of former glory or as fetishes for a social nostalgia.

Right: The Bust of Priest King, Indus Valley. This stone head was found in 1927. It shows a man in a headband and cloak. Perhaps he was a great ruler

Seeing ancient objects as timemarks explains not only why people spend time at ancient monuments but also why they are interested in; and keep ancient objects as relics which they find elsewhere. Things which are perceived as ancient and foreign must, first and foremost, make people think. In this thinking process, archaeological researchers become attached to their works and for them archaeological study forms a significant part of their individual identity, a phenomenon which is followed by common men also.

The ability to symbolize national identity can explain the interest in prehistoric monuments, for they are the treasure of our country of which its people must feel proud of.

While defining ourselves (seeking our identities) whatever our profession or goal in life may be, we mostly draw ourselves on the recent past of one or two generations when we define ourselves as sons or daughters, or as members of a particular generation. When we remember our past it becomes very significant in our socialization as individuals and contributes decisively to the formation of identities. Collective identities often refer to the heritage of a distant past .The past can also form an important part of our identities within the society. The histories and traditions of different strata of the society, the royal families, the working classes or of a common man have become a key part of their modern identities. The underlying reasoning is usually that “long memories can make great people”.

It has been argued that our past has become more important as a source of reassurance and identity as our everyday world changes at ever faster rates, causing alienation. So a search for compensating factors and collective identities are important, as it contains already before our modern age references to time-marks in the ancient landscapes like Harappa, Moenjo-Daro, Mesopotamia, Greece etc.

The Dome of Gurdwara Guru Arjan Dev Ji. Gurdwara is situated opposite Lahore Fort near Badshahi Mosque. This is the place where Sat Gur Arjun Dev Ji was martyred in the River Ravi facing the tortures inflicted by Chandu on 30th May 1606 AD. In 1927 Shiromni Committee took over the charge of Gurdwara and its construction restarted on the 21st April 1930 AD which was completed on 9th Sept 1934 AD. The domes were gold-plated and floors were cemented. The front of Gurdwara is built in marble.

“Attachment to one’s motherland is a common human emotion. Its strength varies among different cultures and historical periods. … A homeland (the motherland) has its landmarks, which may be features of high visibility and public significance, such as monuments, graves, mausoleums, shrines, a hallowed battlefield or cemetery. These visible signs serve to enhance a people’s sense of identity; they encourage awareness of and loyalty to place.”

Ancient burial monuments, beyond being landmarks, can also acquire a meaning closely associated with people’s psyche. The collective vision of a shared origin and identical forefathers and foremothers, linked to ancient traditions, monuments and graves, can be the most important thing which all members of a community share, and about which they are collectively proud in their social memories Ancient burial monuments can therefore be crucial for the unity of a group of people. They seem to stand outside the flow of daily events and are symbols of stability in an ever changing world. One could therefore say: “He who controls the past controls who we are “This is why monuments, prehistoric as well as post historic, do not only link the present with the distant past, but also with the distant future”.

A columns filled Hall inside Royal Fort, Lahore. The  Fort is located adjacent to Walled City of Lahore and right in front of Badshahi Mosque. Origin of fort is believed to be even before the conquest of Lahore by Mahmood of Ghazni in 1021 AD. In 1981, the fort was inscribed as a UNESCO World Heritage Site. It is a huge architectural masterpiece measuring 1,400 feet long and 1,115 feet wide.

It is one explanation for drilling of sites for certain artifacts, discovered in Harappa and Moenjo-Daro. These excavations leave their marks as a well visible symbol for the shared identity of our community, our nation. Individuals may make a public statement about who we are and who our ancestors had been. Furthermore like modern graffiti, such marks have been the result of a private, even secret act of connecting oneself forever with a public monument. Some individuals may have carried the stone dust produced constantly with them, reminding them of the heritage and origin of the community to which they belonged: their roots.

Group identities and a perhaps slightly nostalgic attachment to a homeland or a familiar cosmology may also have been expressed by putting secondary burials into ancient mounds, imitating them for their own burials, or continuing certain traditions. Later finds made at archaeological sites or in their neighborhood as well as ancient objects being re-used can similarly be taken as evidence for activities through which the identity of either individuals or whole groups were connected with the distant past. 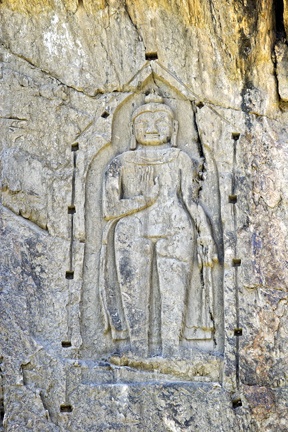 A close up of the rocks near Kargah ravine, some 10 km from Gilgit town shows a rock engraving of Buddha also known as Kargah Buddah (from 7th century A.D).

In later ages, ancient monuments were chosen as meeting places, e.g. for court sessions or political bodies, probably because they were linked so closely with the identity of the community. The ability to symbolize national identity can explain the importance of prehistoric monuments e.g. the Indus Valley craftsmen – identified through the artifacts’ excavated in Harappa and Moenjo-Daro and the obviously deliberate visual and material references to monuments in different places of Pakistan. Similar references to the national past in relation to ancient monuments are frequently found in the journals and works of early travelers and antiquarians.

Summing up, I reproduce here what a German Archaeologist wrote in 1923 about prehistoric relics; (translation mine):

“Heritage is a treasure of our country, and we must be proud of it. It’s quiet and impressive language of the distant past that talks so powerfully to us.”

27 replies to “Heritage – Our Identity – Our Pride”